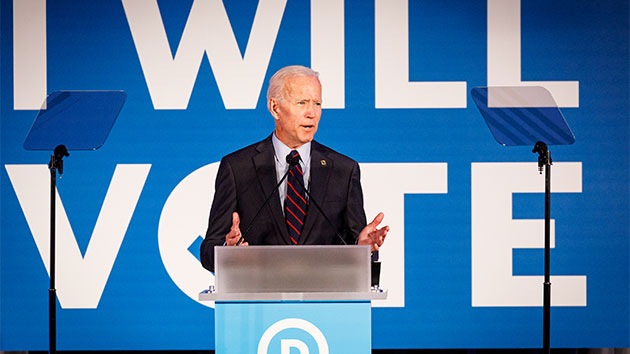 (NEW YORK) — With the rise of anti-abortion laws in the U.S. and the continuing conversation on both sides of the aisle about abortion rights, “The View” co-hosts discussed the consequences presidential candidates could face regarding their stance on the issue.Following the announcement from former Vice President and 2020 hopeful Joe Biden that he no longer supports the Hyde Amendment, which prevents the use of federal funds for abortion, “The View” weighed in on his decision and whether fellow presidential candidates will use it against him.Guest co-host Ana Navarro predicted that the public won’t see anything come from Biden’s reversed stance for at least another ten months.”He’s at the top. He’s got the greatest name ID,” Navarro said. “When you’re at the top, that means more attacks. It means more scrutiny. It means higher expectations — that’s a problem for him.””I think he’s been somewhat clumsy the last couple weeks,” Navarro continued. “People don’t want to feel like, even if it is Joe Biden — who they have affection for — that he’s taking it for granted.””He’s got time to get it together, but he has to get it together,” Navarro added. “Part of me is disappointed by the way he’s handled it, but part of me also thinks that it’s OK to evolve if you learn more facts, if it’s a genuine evolution.”Sunny Hostin said she related to Biden’s struggle with the abortion issue as a Catholic, while also saying his changed position will become problematic.”You have women of color and black women that make presidents, and you realize that the Hyde Amendment affects predominantly women of color and African Americans,” Hostin said. “For him to come out and not recognize that immediately … I don’t know that you can call it clumsy.””I don’t know why he wouldn’t recognize that. He was a senator for so very long. He was the vice president for eight years. He has to understand his constituency,” Hostin continued. “I think that’s going to be very problematic for him.”Meghan McCain called the Hyde Amendment “a great compromise between pro-choicers and pro-lifers,” and pointed out that Biden supported the amendment for decades.”I think flip-flopping on something like this — I actually was surprised by it because he’s filling the moderate compromise lane as the candidate,” McCain said. “He’s alienating the lane that I still see as the easiest way to beat President Trump, and you’re alienating a lot of moderates.””I feel slighted as a conservative and feel slighted as someone who was open to him being president,” McCain added. “It’s a dangerous lane for him to take to go super far left. It’s very dangerous.” Whoopi Goldberg sounded a warning to 2020 candidates regarding an Alabama law that protects the parental rights of rapists.”One issue that every candidate needs to start paying attention to is the fact that because there’s so much anti-abortion law like in Alabama, certain things aren’t happening. In Alabama specifically, a woman who was raped cannot get an abortion, but the parental rights of her rapist are protected. There are things to work out.”Navarro pointed to a new poll conducted by CNN, the Des Moines Register and Mediacom that revealed abortion rights are the top issue among caucus-goers.Every episode of ABC’s award-winning talk show “The View” is now available as a podcast! Listen and subscribe for free on Apple Podcasts, Google Podcasts, TuneIn, Spotify, Stitcher or the ABC News app.