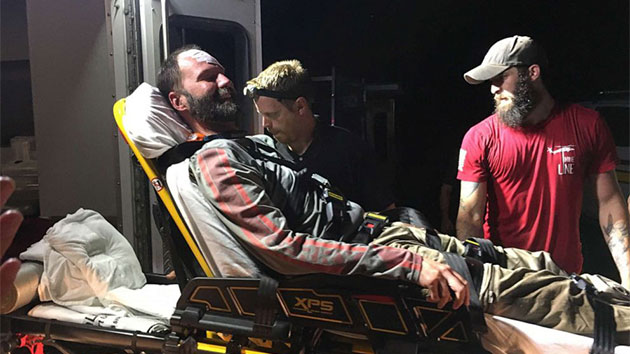 (MENA, Ark.) — An Arkansas hiker missing for nearly a week in the woods couldn’t wait to take his first gulps of clean water when he was located by rescuers, he said soon after he was found.

Josh McClatchy, 38, was reported missing on June 1 after he got lost while hiking in the Caney Creek Wilderness near Mena, Arkansas. He had texted his mother to say he needed help, but cellphone service was spotty and he was unable to give the exact details of his location.

“Without the helicopter, I’m not sure we’d have found him,” Polk County Judge Brandon Ellison told ABC News. “We’d already covered all the ground that we could cover.”

McClatchy was severely dehydrated but otherwise in good shape, Sawyer said. Water was the first thing McClatchy requested upon being located, the Texas native told ABC Dallas affiliate WFAA-TV in a phone interview on Saturday.

“It was so refreshing,” McClatchy said, adding that after he was given an IV, he started to “feel considerably better.”

He had protein bars and bottled water with him when he set off, but it is unclear how much he consumed before he got lost, his family said. He also had a filter straw that could help him drink potentially unclean water.

McClatchy was spotted about four miles off Buckeye Trail, and area where hikers often get lost, and it took about four hours for the rescue teams to carry him out on a one-wheeled rescue cart, officials said. About 35 people participated in the search.

The crew had to rope down dangerous terrain to save him, which included thick treetops and steep mountains, Sawyer told ABC News. The area is also rife with deadly snakes such as copperheads, cottonmouths and rattlesnakes as well as bears, Sawyer said.

McClatchy credited his family, his faith and the people who rescued him for keeping him alive after he spent his 38th birthday alone in the wilderness.

“It’s overwhelming, and it means so much to me,” he said.