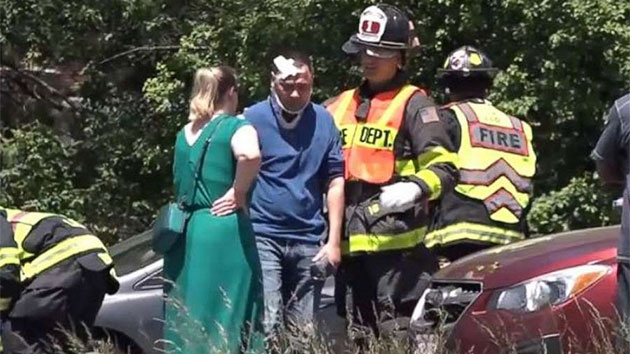 (BOSTON) — A horrific accident on a Massachusetts highway resulted in the deaths of two people when all 11 people inside a van were thrown from the vehicle Saturday afternoon.

The van was carrying a tour group from the Polish American community when it was hit by a Toyota SUV traveling northbound on Route 95 in Attleboro, Massachusetts, about 40 minutes south of Boston, according to the Massachusetts State Police.

Both vehicles crossed into the grassy center median, which caused the Econoline van to tumble upside down and ripped the roof off the vehicle.

All 11 people inside, including the driver, were tossed from the van as it came to a rest on the southbound side of the highway.

The occupants of the van were transported to Rhode Island Hospital in nearby Providence.

Two passengers in the van were pronounced dead at the hospital, authorities said. Both were adult men.

The other nine occupants also suffered “serious” injuries, according to state police.

An investigation into the accident is still being conducted. No one has been charged at this time.

The van had left Philadelphia and picked up passengers in Trenton, Linden and Wallington, New Jersey, and New York City before continuing on to Massachusetts, police said.

None of the passengers in the van have been identified.

DOJ has identified 400 suspects, charged 135 in Capitol riot
Teachers speak out after voting to teach from home, refusing district’s plan for return
Elliot Page and Emma Portner announce divorce after three years of marriage
John David Washington talks following in the footsteps of his Oscar-winning dad, Denzel Washington
Biden’s 1st 100 days live updates: Senators to be sworn in for Trump impeachment trial
Teen speaks out after alerting FBI about father’s alleged role in US Capitol siege