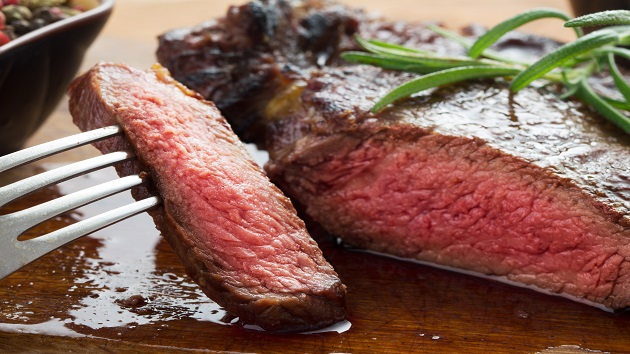 (NEW YORK) — Red meat has been given a bad rep for heart health in people whose diets have a high proportion of it, but a new study finds that white meat may be just as bad when it comes to cholesterol.Despite the common belief that white meats are less detrimental to our health, both red meat and white meat contain saturated fats, which increase levels of LDL (“bad”) cholesterol and increase a person’s risk of heart attacks, stroke and peripheral artery disease.The study from the Children’s Hospital Oakland Research Institute (CHORI) found that people who ate white meat diets consisting of chicken and turkey ended up with cholesterol levels that were no different from those who ate red meat diets consisting of lean beef or pork. Both diets caused significant jumps in cholesterol compared to people whose diets consisted of plant-based proteins.”When we planned this study, we expected red meat to have a more adverse effect on blood cholesterol levels than white meat, but we were surprised that this was not the case — their effects on cholesterol are identical when saturated fat levels are equivalent,” said study senior author Dr. Ronald Krauss, senior scientist and director of atherosclerosis research at CHORI, in the study’s press release.The small study involved 113 people who normally had diets that were either high or low in saturated fats. All participants tried a red meat, white meat and plant-based protein diet for one month each, with the order in which they ate these diets decided at random. In between the monthly diets, participants were able to eat their normal diet for a few weeks. Cholesterol levels were checked before and after each test diet.The study did not include fish, grass-fed beef or processed meats. The plant-based diets emphasized the consumption of legumes, nuts, grains and soy products.Both the red and white meat likely raised the participants’ cholesterol levels higher than the plant-based diet because they contain different kinds of fat.Whereas red and white meat have higher levels of saturated fat, “plant-based diets are higher in monounsaturated and polyunsaturated fats, or ‘healthy fats,’ as well as being packed with fiber,” Larlee Jensen, a registered dietitian in New York City who was not involved in the study, told ABC News.“The combination of adding healthy fats and fiber into your diet can help to lower cholesterol levels,” she added.The study authors said this is the first study to show that both kinds of meat — red and white — cause cholesterol levels to go higher than plant-based protein sources.Dr. Brian Geller, a clinical and interventional cardiologist, told ABC News that the findings support much of what is currently recommended by health professionals. He said the findings suggest that going forward, plant-based diets could be used to help prevent cholesterol problems throughout communities rather than an individual remedy for people who are already dealing with cholesterol problems.That’s not to say that animal sources for protein aren’t good for you. Jensen said that lean cuts of red or white meat can still be a part of a healthy diet when eaten in moderation.Both Galler and Jensen recommended the Mediterranean diet, which is high in fruits and vegetables, whole grains and nuts and limits meats and unhealthy fats. Copyright © 2019, ABC Radio. All rights reserved.