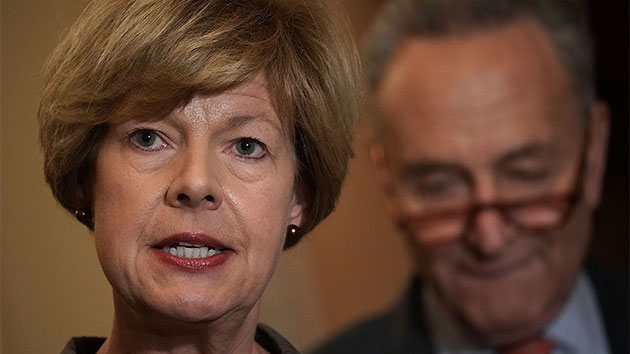 (WASHINGTON) — Sen. Tammy Baldwin of Wisconsin, the first openly gay woman elected to Congress, says the biggest obstacle to advancing LGBT rights in the era of Donald Trump isn’t the president, but complacency in parts of the gay community.

“Both supporters of LGBTQ rights, LGBTQ people themselves, as well as opponents, kinda thought the battle was over after the Supreme Court ruled in the Obergefell case that there is marriage equality,” Baldwin told ABC News Live “The Briefing Room.”

“But what remains the case is that people in over 29 states do not have comprehensive anti-discrimination laws protecting them,” she said.

Baldwin is trying to build a campaign of grassroots support for the EQUALITY Act, a bill she sponsored which would add sexual orientation and gender identity to federal civil rights law as protected classes. The measure would prohibit discrimination in public facilities, education, employment and housing.

It passed the Democrat-controlled House of Representatives last month with bipartisan support but faces an uphill climb in the Republican-controlled Senate.

“The bill is bipartisan in both houses of Congress and that’s a sign of progress also. I’m hoping that in this era when President Trump and his administration are taking a step backward in some areas by executive edict or executive order, that we will get more bipartisan support,” Baldwin said.

The measure would need 60 votes to pass the Senate. Republican Sen. Susan Collins of Maine has publicly endorsed the bill, however, Republican Majority Leader Mitch McConnell has not expressed a willingness to bring it for a vote.

“Do we have the requisite number of Republicans? We have virtually all the Democrats. That’s our task right now,” Baldwin added, “to open the dialogue. Those conversations are foundational to getting it over the finish line.”

Baldwin said a number of Republican senators are privately open to supporting the measure. None have come forward as co-sponsors. President Trump opposes the bill.

“I feel I might be opening people’s eyes to the discrimination that really does still go on today and why this is so necessary in states, sometimes like their own,” Baldwin said.