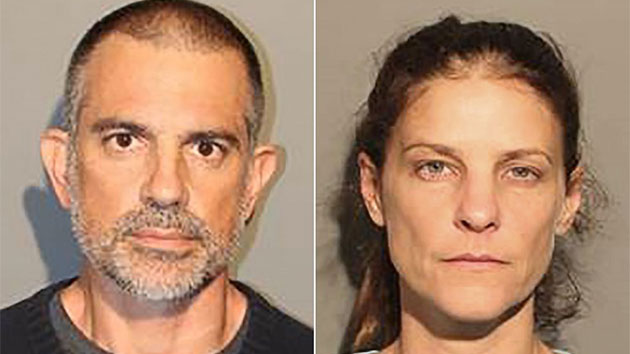 (NEW CANNAN, Conn.) —  In the 15 days since Jennifer Dulos was reported missing, her husband and his girlfriend have gone to jail, her blood-soaked clothes have been found in trash cans and her five children have relocated to New York City to stay with her mother.

Yet Dulos has still yet to be found.

The 50-year old mother was last seen driving a black Chevrolet Suburban in tony New Canaan, Connecticut, on May 24, New Canaan police said. She did not show up for several appointments that day, police said, and friends reported her missing 10 hours after she was seen dropping her kids off at school.

Her SUV was found in New Caanan later that day, but she was not inside the vehicle, police said. They checked her home later that night, yielding no results.

In the next week, police found blood stains in her garage in Farmington, Connecticut, where investigators believe Dulos experienced a “serious physical assault,” according to arrest warrants obtained earlier this week. Clothes and sponges laced with her blood were recovered from trash cans in Hartford.

Her estranged husband, Fotis Dulos, 51, with whom she was in the middle of a contentious divorce and custody battle, and his live-in girlfriend, Michelle Troconis, 44, were charged last Saturday with tampering with or fabricating physical evidence and hindering prosecution.

On Monday, the couple appeared in court and bond was set at $500,000. Hours later, Troconis posted bond. Dulos remains in custody.

On Friday Traconis and her attorney were spotted meeting with investigators at Dolus’ home in Farmington, which is on the market for $4.4 million. She and Dulos are due back in court on Tuesday.

On the night Jennifer Dulos was reported missing, surveillance video showed a man resembling Fotis Dulos throwing around 30 garbage bags into dumpsters in Hartford at 7:15 p.m., according to court documents. The video also captures a woman in the passenger seat of a car.

That trash is processed at Materials Innovation and Recycling Authority’s in Hartford, where state police have been searching this week and returned again on Saturday, the Hartford Courant reported.