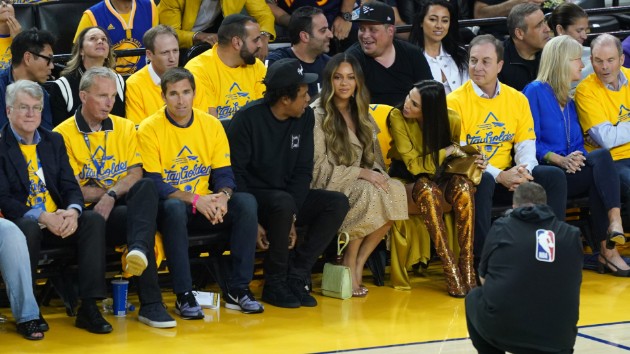 (OAKLAND, Calif.) — The wife of Golden State Warriors owner says that a viral exchange from earlier this week between her, Jay Z and Beyonce resulted in online bullying and death threats. Nicole Curran, who is married Joe Lacob, spoke to ESPN about the moment earlier this week in which she leaned over to talk to Jay-Z — prompting Beyonce to look down and stop smiling during the courtside exchange.It really doesn’t look like all that much, but social media has been known to attack for less. In this case, Curran says she’s received death threats.

Jay-Z and Beyoncé are courtside for Game 3 😎 pic.twitter.com/6mmJuN8Odn

Curran had been portrayed as drawing disdain from Beyonce. But she says she was just being a good host to her NBA Finals guests and asking Jay-Z what he wanted to drink.”There was no hostility, I was trying to be a good hostess,” she told ESPN. “I’ve never experienced cyber bullying like this. I can’t believe our players go through this. That kids go through this.”Beyonce’s team seems to be shutting down those fake rumors as well. Her publicist released a statement of support for Curran on Instagram. Yvette Noel-Schure posted a photo of Beyonce and Jay-Z and wrote, “I am looking back today at the start of The OTRII tour, one year ago. It was a place of joy, unimaginable entertainment from two of the best performers in the world, and a place of love. Every single day on that tour I saw love. Which is why I also want to speak here to the beautiful BeyHiVE.”She continued, “I know your love runs deep but that love has to be given to every human. It will bring no joy to the person you love so much if you spew hate in her name. We love you.” While she hasn’t commented herself on the bullying Curran has received, Beyonce has also been spreading the love like Noel-Schure.She posted a few pics from the AFI Gala with her dear friend, Melina Matsoukas. Beyonce and AFI honored the director with the Franklin J. Schaffner Alumni Medal. “Melina, I’m so proud of you my sister. Love you deep,” she wrote.Copyright © 2019, ABC Radio. All rights reserved.