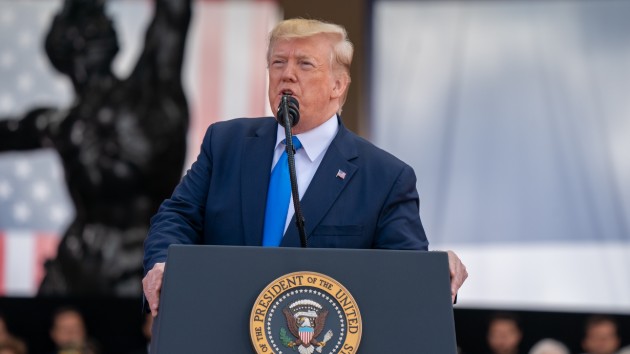 (WASHINGTON) — Months ahead of July Fourth, President Donald Trump had already issued a save the date for what he called “Salute to America,” a celebration to coincide with an annual Independence Day tradition in the nation’s capital.His plan was spelled out in a tweet: Hold one of the biggest gatherings in the history of Washington, with a major fireworks display, entertainment and a presidential address.But, less than a month out from the Fourth of July, the D.C. mayor’s office said it doesn’t have details beyond what the president tweeted about a “Salute to America” in the nation’s capital.”We understand the federal government is moving forward with plans that include a ‘Salute to America,’ but we do not have details beyond that and urge the federal government to make that information available to the public. Planning for the Fourth of July has always been, and continues to be, within the jurisdiction of the federal government,” LaToya Foster, the mayor’s director of communications, said.Trump’s event would be in addition to the extensive Fourth of July celebration that takes place in the nation’s capital every year.A spokesman for the Park Police told the Washington Post that the president plans to speak at the memorial and the agency said it would continue to work with the White House on “creating a Salute to America program that will bring Americans from all over the country together in [a] celebration of our great nation.”Information about the event from the White House remains sparse.”President Trump loves America and wants to help all Americans celebrate our Nation’s Independence on July 4. The White House, along with the National Park Service and the Department of Interior, continue to make preparations for the day’s activities,” White House deputy press secretary Judd Deere told ABC News in a statement.The president continues to ramp up enthusiasm for the event.”On the Fourth of July we are having, in Washington, D.C., a great tribute to America. I hope you can all come. Fourth of July, keep it open. We want to bring millions of people into the city and we want people to come who love our country. Those are the people we want,” he told attendees at the Conservative Political Action Conference in March.But bringing “millions of people into the city” has prompted concerns and pushback from some who believe the president’s leading role in the event could transform the day into logistical nuisance. In addition to security, funding and logistical concerns, some have also accused the president of wanting to turn the annual non-partisan celebration into a political event.”President Trump’s efforts to insert politics into a celebration of our nation’s history is extremely alarming,” House Majority Leader Rep. Steny Hoyer, D-Md., said in a statement. “Forcing taxpayers to foot the bill for what amounts to a political rally is irresponsible and a misuse of funds. I strongly urge the President to reconsider his proposed event.”Hoyer, along with Democratic Congressional members Raúl Grijalva and Betty McCollum sent a letter to Trump in response the proposed event.”The Fourth of July celebration is not about any one person; it is not a time for campaigning — but a time to celebrate our unity as a free nation,” McCollum said. Copyright © 2019, ABC Radio. All rights reserved.