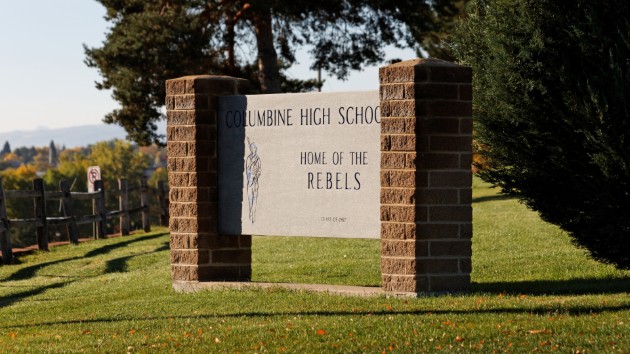 (LITTLETON, Colo.) — Colorado school officials say they are “exploring the concept” of demolishing Columbine High School, the site of one of the nation’s most notorious school shootings, and building anew.Two students opened fire at the high school in Littleton, Colorado, on April 20, 1999, gunning down 12 of their fellow students and one teacher before killing themselves. The massacre preceded a wave of school shootings to come, including those at Virginia Tech, Sandy Hook Elementary School and Marjory Stoneman Douglas High School.”The tragedy at Columbine High School in 1999 serves as a point of origin for this contagion of school shootings,” Jason Glass, superintendent of the encompassing school district, Jeffco Public Schools, said in an open letter to the community on Thursday. “School shooters refer to and study the Columbine shooting as a macabre source of inspiration and motivation.”In the letter, Glass posits, “In 1999, no guidance existed on what to do with a building such as Columbine High School. Today school safety experts recommend tearing down buildings where school shootings take place. Since the morbid fascination with Columbine has been increasing over the years, rather than dissipating, we believe it is time for our community to consider this option for the existing Columbine building.”The superintendent also makes reference in the letter to Sol Pais, an 18-year-old woman from Florida who was allegedly obsessed with the Columbine shooting. In April, Pais traveled to Colorado with a shotgun and ammunition, and threatened schools in the Denver area before killing herself.”Columbine High School has a gravitational-pull for these sorts of individuals,” he said, noting that local law enforcement and the Jeffco Public Schools Department of School Safety make contacts with “hundreds of individuals” every year seeking to enter Columbine High School and “reconnect with the 1999 murders.””Most of them are there to satisfy curiosity or a macabre, but harmless, interest in the school,” Glass added. “For a small group of others, there is a potential intent to do harm.”Columbine High School is now among the safest schools in the country, boasting a “sophisticated system” of surveillance and security protection, according to Glass. But the building’s blood-stained history remains.”The school site continues to serve as a source of inspiration for potential school shooters, and its lasting impact only seems to be growing,” Glass said. “Perhaps influenced by the 20th anniversary of the shooting, over the past 11 months the number of people trying to enter the school illegally or otherwise trespassing on school property has been increasing – now to record levels.”A $15 million renovation and expansion of the current school was approved by voters last year. But the Jeffco Public Schools Board of Education and administration are exploring the possibility of asking voters for an additional $60 to $70 million to build a new building, according to the superintendent.Some of the ideas Glass said they are considering include demolishing the existing building and replacing it with fields and controlled entry points, and constructing the new school just west of the current location with enhanced safety features.”We are in the very preliminary and exploratory stages of these conversations,” he said, “and we are seeking community feedback and thoughts on this proposal.”Sandy Hook Elementary School in Sandy Hook, Connecticut, was torn down after Adam Lanza killed 20 students and six teachers in December 2012. There has also been discussion of tearing down Building 12, where the massacre at Stoneman Douglas High School in Parkland, Florida, took place in February 2018. Copyright © 2019, ABC Radio. All rights reserved.