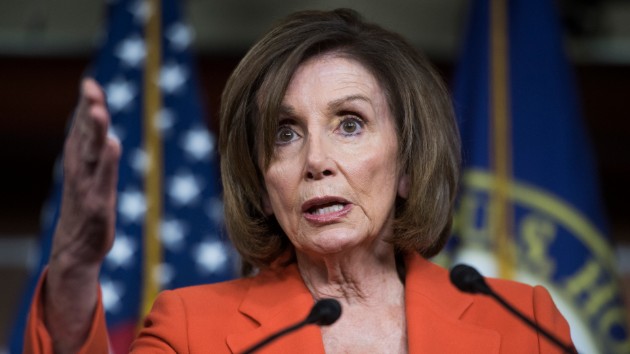 (WASHINGTON) — In a closed door meeting on Capitol Hill Tuesday, House Speaker Nancy Pelosi told key Democratic committee leaders she’d rather see President Donald Trump go to “prison” than start an impeachment process, according to officials familiar with the conversation.”I don’t want to see him impeached, I want to see him in prison,” Pelosi told five committee chairs, comments that were first reported by Politico.Ashley Etienne, a spokesperson for Pelosi, called Tuesday’s meeting “productive” and would not comment on the reported prison remark, saying that the leaders “agreed to keep all options on the table” moving forward.Pelosi’s private remarks — described as an aside by one official familiar with her comments — come as she faces growing calls to launch impeachment proceedings against Trump from inside her party.Nearly 60 House Democrats — 1-in-4 members of the caucus — including half of the majority on the House Judiciary Committee, want to open proceedings, according to an ABC News analysis.House Judiciary Committee Chairman Jerry Nadler of New York, who was one of the five chairmen in the closed-door meeting with Pelosi on Tuesday, has repeatedly laid out the case for launching impeachment proceedings to Pelosi in recent weeks.On Tuesday, he again laid out the case, arguing that it could bolster Democrats’ legal standing in court as they battle with the Trump administration over access to documents and testimony, according to sources familiar with the meeting.Democratic sources familiar with Nadler’s thinking believe he is sympathetic to calls from members of his committee to open impeachment proceedings, and has been privately supportive of the effort in conversations with them.In an interview with CNN on Wednesday, Nadler was asked if he and Pelosi are “on the same page” on the issue of impeachment, and paused before responding.”As I said, we are launching an inquiry now and whether we’ll launch an impeachment inquiry, it may come to that,” he said.”When that decision has to be made, it will be made not by any one individual, it will be made probably by the caucus as a whole. Certainly, Nancy will have the largest single voice in it, various committee chairmen and rank and file members,” he added.A spokesman for Nadler declined to comment on the meeting Thursday.Pelosi has been wary of starting the impeachment process without bipartisan support, concerned that the effort could potentially backfire and cost Democrats their House majority. There is also concern that impeachment could help Trump’s reelection chances, particularly if the GOP-led Senate votes to acquit him.In a news conference Wednesday, she defended Democrats efforts to continue their oversight investigations and bring the Trump administration to court when necessary to enforce subpoenas.”Make no mistake,” Pelosi said. “We know exactly what path we’re on. We know exactly what actions we need to take. And while that may take more time than some people want it to take, I respect their impatience. It’s a beautiful thing and it’s important to our country.””I’m not feeling any pressure,” she said of the impeachment push from some members. Copyright © 2019, ABC Radio. All rights reserved.