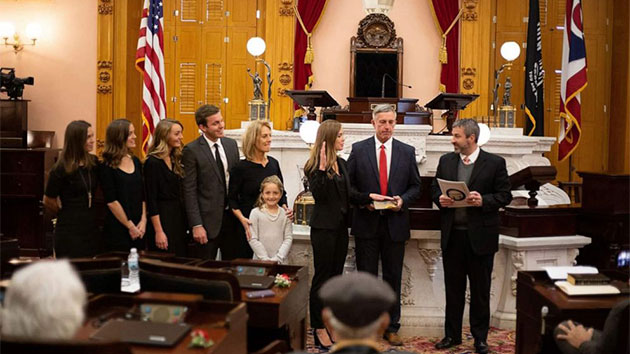 (COLUMBUS, OH.) — Jena Powell brings eight years of experience as a business owner and a lifetime on a farm to her new job in Ohio’s House of Representatives — and she’s only 25.“When I first started running there were some comments regarding my age, but at the end of the day what I always tell people is, this is what I believe, this is where I stand and this is what I’ll do to fight for you,” Powell said on ABC News’ “The Briefing Room.”Powell is one of the youngest Republicans to serve in the country and the youngest member of the Ohio general assembly, but she says it’s not her age or gender that made her run for office — it was her love for her country.“I’m here because our Founding Fathers knew and understood that if someone had an idea, that we’d fight for that American dream,” Powell said.Powell called on her Republican colleagues to appeal to young voters. “We need to do a better job representing what we believe in and why conservatism works,” she said.Powell, who represents Ohio’s 80th state congressional district, proposed a piece of legislation this week to allow private sector businesses to add apprenticeship programs for people to obtain certain licenses.“It gives the workforce more power to choose,” Powell said.Ohio House Bill 258 is inspired by Ivanka Trump and the Trump administration’s push to help people find different ways to get training for jobs without necessarily spending the time or money on a four-year college degree.This workforce training program hit especially close to home for Powell, who started and still runs an outdoor billboard company with her brother out of Arcanum, Ohio. They own about 600 billboards throughout the state, she said.Powell is one of seven children and grew up in rural Ohio in a town of about 2,000 people. She said she hopes other people of any age, gender or political ideology follow her lead and run for office.“Know what you believe, know what you stand for, and come here ready to fight for that, Powell said.”

Watch the full “Millennials Who Won” segment by clicking on the video above.