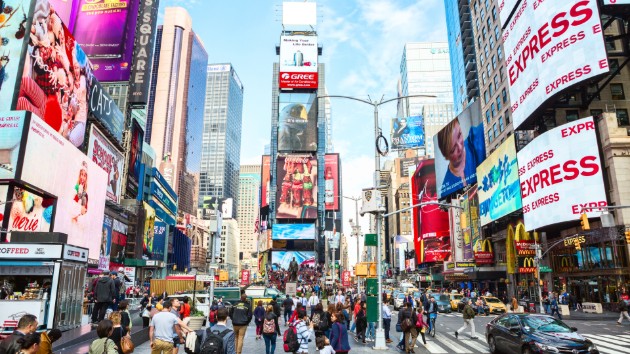 (NEW YORK) — An unidentified man is in federal custody after he asked about buying grenades and discussed possibly detonating them in Times Square, according to law enforcement sources. The man was intercepted by federal and local officials, and he posed no imminent threat.He is expected to appear in federal court in Downtown Brooklyn on Friday.He was detected both inquiring about obtaining grenades and discussing using them in Times Square, the sources told ABC News.Members of the New York Joint Terrorism Task Force — made up of FBI agents and New York Police Department detectives — began tracking the man and eventually took him into custody.He is not believed to be linked to any other people or part of a larger plot.The U.S. Attorney’s Office is expected to comment later Friday.The NYPD referred all questions to the FBI.Times Square has been the site of a few attempted attacks in recent years. In May 2017, a man crashed his car into a group of people, killing one and injuring 20 others. The suspect, Richard Rojas, was later determined to be on drugs and suffering from mental illness.The most noteworthy example of a foiled terror attack in Times Square came in 2010 when two good Samaritans noticed a smoking car and alerted authorities, who foiled the car bomb attempt.

Voting rights legislation across country looks to both restrict, expand access
Health care worker and mother of 2 loses home in fire, now her colleagues are stepping in
3 teens arrested in mysterious Colorado arson that killed 5 members of Senegalese family
Lawyer, single mom finds solace in community aid during COVID-19 unemployment
County apologizes for seniors having to wait outside in cold for COVID-19 vaccine
COVID-19 ‘long-haulers’ trying to decode lasting symptoms a year after falling ill