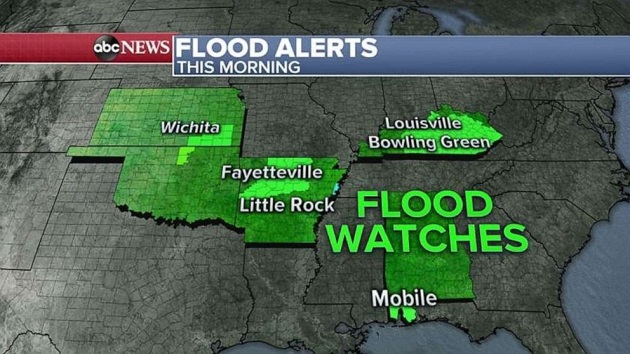 (NEW YORK) — Heavy rain and severe weather pounded parts of the Southern Plains and Deep South on Thursday, with eight reported tornadoes in three states: Louisiana, Arkansas and Alabama.Also, very heavy rain fell in a short period of time from Tulsa, Oklahoma to Oklahoma City and to Baton Rouge, Louisiana, prompting multiple water rescues. Tulsa received more than 4 inches of rain in three hours, while Baton Rouge saw 4 to 5 inches in a matter of hours as well. There are five states under flood alerts from Kansas to Alabama on Friday.The storm system and all the tropical moisture will move into the Southeast on Friday and into the weekend, producing copious amounts of rain from Florida to the Carolinas.Some areas could see more than a half an inch of rain.Severe weather will be found Friday in the Northern Plains, including the Dakotas and west to Montana and Wyoming, where damaging winds and large hail are the biggest threats. There is an isolated chance for tornadoes as well.