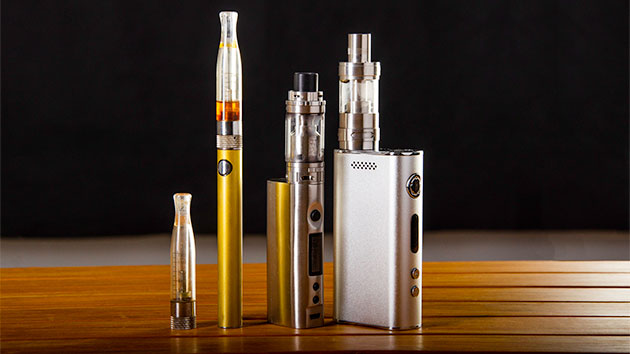 (NEW YORK) — The federal government on Friday issued formal warnings to companies that use social media “influencers” to promote fruit flavored e-cigarette products.In letters to four e-cigarette companies, the Food and Drug Administration (FDA) and the Federal Trade Commission (FTC) said the promotional posts on social media failed to include standard nicotine warnings.“We cannot and will not risk a generation of youth to a lifetime of nicotine addiction,” Acting FDA Commissioner Ned Sharpless said in a statement Friday.Some of the flavors targeted by the FDA include “Mango Pineapple,” “Strawberry Kiwi,” and “Cotton Cookies Nicotine Salt.”Solace Vapor said it plans to terminate its relationship with the social media influencer who was accused of improperly marketing the company’s products on social media.“All of Solace Vapor’s internal packaging, marketing and nicotine warnings are compliant with FDA standards,” the company said in a statement to ABC News. We will be reviewing and terminating any and all 3rd party influencers who may not be compliant with our marketing policies.”The move continues the FDA’s crackdown on what both Sharpless and his predecessors have called an “epidemic” of e-cigarette use by minors.In a study from Centers for Disease Control (CDC), nearly 1 of every 5 high school students reported using e-cigarettes last year. The same was true for about 1 of 20 middle school students. The results indicating an increasing trend in tobacco product use among teens.Already known as a highly-addictive substance for all consumers, nicotine is particularly harmful to brain development in young people, according to the CDC. In some cases, the CDC says, nicotine has been found to cause lapses in focus and negatively impact the ability to learn.Over the past year, the FDA has pursued more aggressive measures against companies that manufacture, market and sell e-cigarette products. Under federal regulation, the electronic devices and the nicotine infused liquids used in them are classified as tobacco products. Copyright © 2019, ABC Radio. All rights reserved.