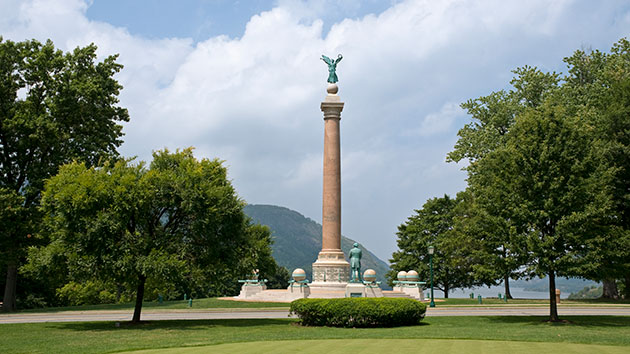 (WEST POINT, N.Y.) — The West Point cadet killed in an overturned vehicle training accident at the U.S. Military Academy was identified Friday.Cadet Christopher J. Morgan, 22, of West Orange, New Jersey, was part of the Class of 2020. He was a law and legal studies major and a recruited athlete who was a standout member of the Army Wrestling Team, according to a statement from West Point.Morgan was killed Thursday morning when a 5-ton Light Medium Tactical Vehicle used for personnel and equipment overturned in a training area off of Route 293.“We are devastated by the news of Chris’ passing,” said West Point wrestling Coach Kevin Ward. “He was a talented, hardworking and determined athlete who loved his sport. Chris had an infectious personality with a smile big enough to fill any room, and a heart big enough to love everyone around him. He made everyone around him better, and he will be greatly missed.”A vigil is being held for Morgan at West Point on Friday evening.Among 22 individuals in the vehicle, 19 cadets and two soldiers were also injured.Army and local first responders at the scene treated the injured near the Camp Natural Bridge training site, which is on U.S. Military Academy property, officials said.The injuries ranged from face abrasions to a broken arm.The accident occurred as the cadets — who are rising seniors and part of the class of 2020 — were traveling to a land navigation training site during annual summer training at the academy, West Point Superintendent Lt. Gen. Darryl A. Williams said at an afternoon news conference.He called it a “tragic day” for the West Point community and the U.S. Army.During the summer months, West Point cadets train in field exercises common throughout the active-duty Army. One of the two Army soldiers on the truck was driving — not a cadet — when the accident occurred, Williams said.There are 2,400 cadets currently training at the U.S. Military Academy.President Donald Trump tweeted about the “terrible accident” on Thursday, saying, “We mourn the loss of life and pray for the injured. God Bless them ALL!””My heart breaks for all those involved in the tragic training accident at West Point this morning,” Gov. Andrew Cuomo, D-N.Y., said in a statement. “These courageous cadets and soldiers represent the best of New York state and our country, and we owe them a debt of gratitude for their bravery in choosing to serve our country and protect our freedoms.”Copyright © 2019, ABC Radio. All rights reserved.