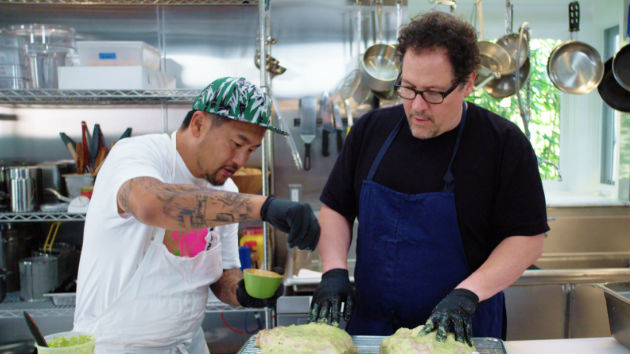 (LOS ANGELES) — Avengers fans who haven’t yet had their fill of Endgame should take a seat at the table and fill up on the new series of Netflix’s The Chef Show, which debuts today.  Specifically, the series’ second episode.

Created by Iron Man director and foodie Jon Favreau and star chef Roy Choi [CHOY], who Favreau trained with for his hit indie film Chef, The Chef Show follows the pair as they hit the road and sample some of the finest food in the country — and Favreau taps some of his celebrity friends to take the ride with them.

As the Marvel stars feast at an eatery called Holeman and Finch, they also talk shop. They reminisced about 2008’s Iron Man, with Feige saying they only hoped it “could just do well enough that maybe we can do another one.”

Marvel Studios has made 22 more superhero flicks since then.

Downey reveals the moment when he suspected the movie would appeal to a wide audience: “I just remember going to one of the midnight shows, and seeing a single mother [rocking] her baby in a carriage in the aisle, while she was watching it.”

The Chef Show is now streaming on Netflix.