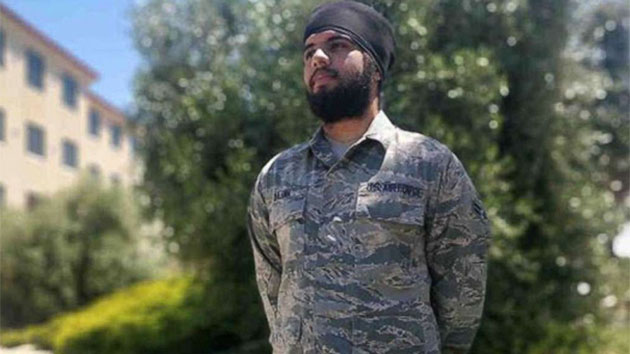 (WASHINGTON) — The Air Force has agreed to a historic accommodation for a Sikh airman, saying that he will be allowed to maintain a beard and unshorn hair and wear a turban in observance of his faith.The first-generation American, Harpreetinder Singh Bajwa, will be exempted from the Air Force’s grooming and dress rules, the Sikh American Legal Defense and Education Fund said in a statement on Thursday.”I’m overjoyed that the Air Force has granted my religious accommodation,” Bajwa said in the statement. “Today, I feel that my country has embraced my Sikh heritage, and I will be forever grateful for this opportunity.”Last year, the Air Force granted the first Muslim airman an exemption to wear a beard while in uniform, and in 2017 the U.S. Army said it would allow turbans and hijabs.”The Air Force can confirm that Airman 1st Class Harpreetinder Singh Bajwa was granted a religious accommodation in accordance with Air Force policy.” Maj. Nicholas Mercurio, an Air Force spokesman told ABC News.”The Air Force places a high value on the rights of its members to observe the tenets of their respective religions or to observe no religion at all.”Sikhs keep their unshorn hair tied in a bun or a top knot on top of their head. The hair is then covered by a turban which compromises the daily uniform of a Sikh. For Sikhs, wearing a turban form is an “external identity” according to the Sikh Coalition. Copyright © 2019, ABC Radio. All rights reserved.