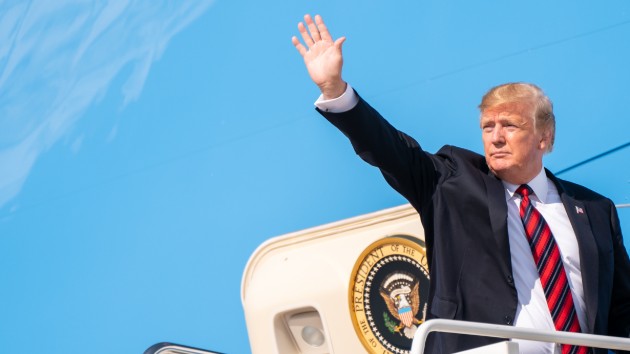 (WASHINGTON) — With his visit to the cliffs of Normandy on Thursday to mark the 75th anniversary of D-Day, President Donald Trump is continuing a pilgrimage begun by President Ronald Reagan. Reagan in 1984 became the first U.S. president to visit the shores of Normandy to mark the anniversary of allied forces invading occupied France, a day remembered as the turning point for the allies against Nazi Germany in World War II.”These are the boys of Pointe du Hoc. These are the men who took the cliffs. These are the champions who helped free a continent. These are the heroes who helped end a war,” Reagan said in a speech on the 40th anniversary.Reagan’s predecessor, President Jimmy Carter, actually was the first U.S. president to visit the site, in 1978, but his visit did not coincide with the anniversary.Many presidents since Reagan have continued the tradition of visiting on the anniversary, an act of remembrance for the lives lost that day and to celebrate their contribution to the ultimate victory of the allied forces.Ten years after Reagan’s visit marking the 40th anniversary, President Bill Clinton also made the pilgrimage.President George W. Bush visited on Memorial Day in 2002, when the memory of the Sept. 11th attacks was still fresh and as the U.S. and its allies were facing a new kind of war, against terrorism.President Barack Obama visited Normandy five years ago on the 70th anniversary.Copyright © 2019, ABC Radio. All rights reserved.