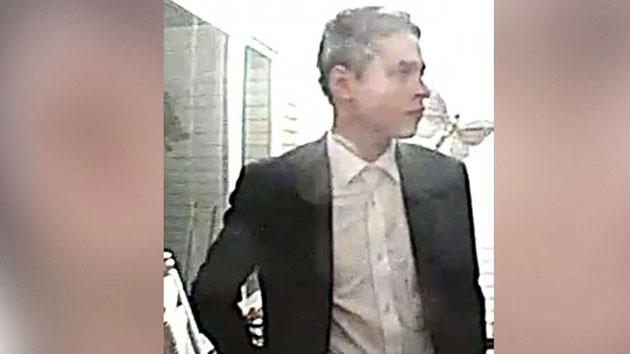 (WHEATON, Penn.) — A man is in custody after Illinois police say he was caught on homeowners’ cameras impersonating a police officer.Two other suspects were also taken into custody Thursday and Wheaton police say they are looking for a fourth person who may be involved.The impersonator, described as being in his 20s, had a fake badge and a police scanner or scanner app on his phone when he approached homes in the Chicago area on Monday and Tuesday, authorities said.

(1 of 2) Wheaton Police are investigating reports of this individual impersonating a police officer/detective on June 3 & 4. These images show the suspect Wheaton Police are seeking, a white male in his 20s displaying a badge. Anyone with info should call Lt. Cooley 630-260-2077. pic.twitter.com/U2EIyf7WoR

“Hi, sorry to bother you so late,” the man says in one homeowner video obtained by Chicago ABC affiliate WLS. The man introduced himself as an investigator with the Winfield Police Department.The suspect asked residents “various police-related questions” but didn’t make threats or try to go into the homes, said police in Wheaton, about 30 miles west of Chicago.”Here are an actual Wheaton Police Detective shield & Wheaton Police star for reference,” the police department said via Twitter. “Wheaton Police Officers/Detectives will always identify themselves by uniform or credentials.”

(2 of 2) Here are an actual Wheaton Police Detective shield & Wheaton Police star for reference. Wheaton Police Officers/Detectives will always identify themselves by uniform or credentials. Residents may call the police department at 630-260-2161 to verify an officer's identity. pic.twitter.com/nYiBOSU6D3

In 2nd Trump impeachment trial, will Chief Justice John Roberts preside?
Trump plans to leave in dramatic fashion yet continues to stay out of sight
Armie Hammer apologizes to Miss Cayman organization in latest online controversy
At least 21 states activating National Guard troops in capitals to prepare for possible attacks
Damaging winds expected in California, heavy snow for the Rockies and Eastern Great Lakes
‘WandaVision’ star Paul Bettany on his father’s struggle to come out of the closet