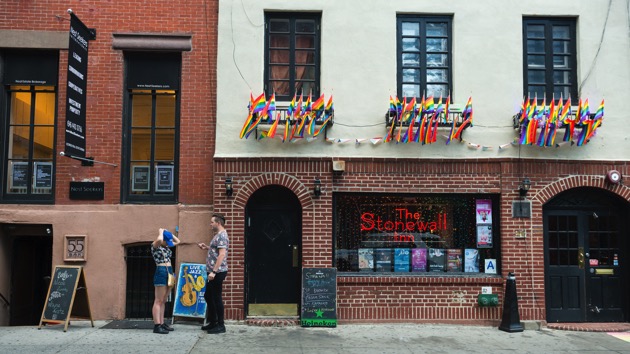 (NEW YORK) — New York Police Department Commissioner James O’Neill apologized on behalf of the department for the 1969 raid at Stonewall Inn — an event that helped spawn the modern LGBTQ civil rights movement.O’Neill‘s long-awaited apology on Thursday came amid mounting pressure from local politicians and leaders within the LGBTQ advocacy circle who noted that New York City had never apologized for the violent raid, which triggered a multi-day community uprising.The raid unfolded in the early hours of Saturday, June 28, 1969, when NYPD officers stormed into the bar to enforce a discriminatory law that made it illegal to serve alcohol to gay people.O’Neill, who has held the helm at the department since 2016, said the officer’s actions were inexcusable.”I think it would be irresponsible of me as we go through World Pride Month not to speak of the events at the Stonewall Inn in June of 1969,” O’Neill said at the department’s inaugural pride safety briefing. “I’m certainly not going to be an expert of what happened at Stonewall. I do know what happened should not have happened.””The actions taken by the NYPD were wrong, plain and simple,” he added.The raid at the Stonewall, a gay bar in Manhattan’s Greenwich Village neighborhood, sparked protests that helped launch a civil rights movement. Stonewall and the small park outside are now part of a national monument. Special ceremonies are scheduled to take place at the iconic bar on Saturday, June 28, to commemorate the 50th anniversary of the uprising.Public calls for an apology came as recently as early Thursday when New York City Pride, the non-profit responsible for producing the city’s official LGBTQ pride week, scolded the department on Twitter.”We demand @NYPDNews issue an apology to the LGBTQIA+ community for the violent police raid that triggered the #Stonewall Uprising,” the organization tweeted. “@NYPDONeill is offered the stage at the #Stonewall50 Commemoration Rally during #WorldPride2019 on June 28 to issue the apology,” it added, welcoming O’Neill to the city’s annual pride parade.”The organization thanked O’Neill following his comments on Thursday morning.  New York City council speaker Corey Johnson, who is openly gay and exploring a run for NYC mayor in 2021, had also called for an apology and “reconciliation.””I know that the NYPD in the past has apologized in the past has apologized for other incidents that have occurred, so I think the NYPD apologizing on this would be a very very good thing,” he told 1010 WINS news in an interview on Wednesday. “I think it would be a step towards further healing and reconciliation.”NYPD officials also announced that it plans to create consortium to help it communicate with private businesses and organizations in the LGBTQ community.The initiative, modeled after their successful NYPD Shield program, will be a way to quickly inform the community of police news and pending security concerns. The Shield program is a public-private partnership that has successfully shared security information with major businesses in the city.The department unveiled the plan during its first Pride Month Safety Briefing, where it also honored its LGBTQ officers.”We are honored to host community members at 1 Police Plaza for our inaugural Pride Safety Briefing,” the department tweeted. “NYC is the first US city to host World Pride. Over 3 million people are expected to participate in events throughout June – & we are prepared to keep everyone safe.” Copyright © 2019, ABC Radio. All rights reserved.