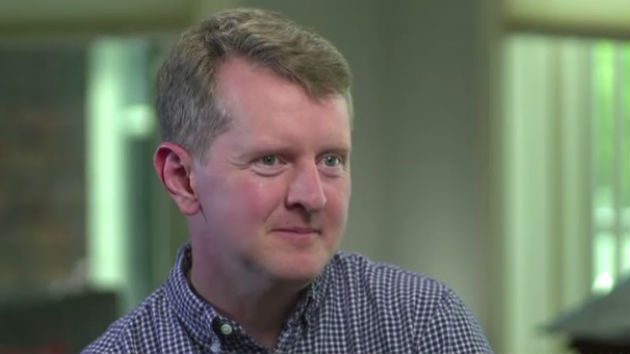 (LOS ANGELES) — What is “inevitable?”Jeopardy! legend Ken Jennings selected that response when asked if he might one day face off against recently-unseated champ James Holzhauer.  Holzhauer’s winning streak made headlines before coming to an end just shy of breaking the regular season prize money record earlier this week.”It’s got to be inevitable,” Jennings, 45, said in an exclusive interview with Good Morning America when asked if there would ever be a Jennings-Holzhauer showdown on the beloved game show.”But Jeopardy! only does those special tournaments so often,” he added. “And obviously I can’t get 29-year-old Ken to show up with his sleek, 29-year-old brain, it’s got to be me with my broke-down brain.”Jennings, of Seattle, holds the Jeopardy! record for the most consecutive games won — 74 — and the highest winnings in regular season play — $2,520,700 — according to the show’s Hall of Fame.Jennings said he was cheering for Holzhauer during his 32-week winning streak, saying, “For many years, I have assumed that the record is beatable.””It seemed like he might be the guy, the chosen one, so I was very excited,” he said. “I wanted to see it come down to the wire, I wanted to see if it could be beaten because I think it can be done.””He was so close to the cash record,” Jennings added. Jennings even equated Holzhauer’s Jeopardy! prowess to the AI-powered IBM supercomputer Watson, who famously beat Jennings during a Jeopardy! match in 2011.”Watching James on that show, he feels as close to Watson as you can get and still have a pulse,” he said. “My guess is playing against James is going to be a lot like playing against Watson.”

In scathing draft of letter never made public, Trump chided James Comey for ‘erratic,’ ‘self-indulgent’ conduct
Giuliani says he won’t represent Trump at president’s impeachment trial
Why Joe Biden’s inauguration will be like no other — and how to watch
Newborn giraffe dies when mother accidentally steps on its neck after giving birth
Giuliani says he’s working on Trump’s impeachment defense, would argue voter fraud claims
“Oh, it’s fantastic!” Diane Lane loves the fans prompting the release of the ‘Justice League’ “Snyder Cut”