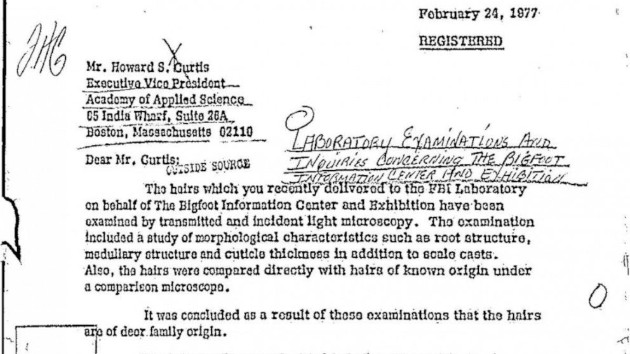 (NEW YORK) — The FBI made public 22 documents from it records archive on Wednesday, revealing that it once opened an investigation into the possible existence of Bigfoot in the 1970s.Federal investigators opened the probe in response to a request from Peter Byrne, an Oregon Bigfoot hunter who spent decades trying to prove that the hairy mythical creature was real, according to the newly released records. “Will you kindly, to set the record straight, once and for all, inform us if the FBI has examined hair which might be that of a Bigfoot; when this took place, if it did take place; what the results of the analysis were,” Byrne wrote in a letter dated Aug. 26, 1976. “Please understand that our research here is serious. That this is a serious question that needs answering … ”Byrne — who served as the director of the Bigfoot Information Center and Exhibition, an effort sponsored by the Academy of Applied Science in Boston — eventually convinced the FBI to analyze mysterious hair and tissue samples in 1976, with hopes that it would help him prove his case.The FBI said it analyzed 15 unidentified hair and tissue samples for the sake of “scientific inquiry” at Byrne’s request. The mysterious animal in question turned out to be “of the deer family,” according to the FBI.“The hairs which you recently delivered to the FBI Laboratory on behalf of The Bigfoot Information Center and Exhibition have been examined by transmitted and incident light microscopy,” Assistant FBI Director Jay Cochran wrote in a December 1976 letter to Byrne. “It was concluded as a result of these examinations that the hairs are of a deer family origin.”The agency closed the investigation in 1977, but that hasn’t stopped amateur investigators globally from searching for the creature.In fact, Byrne, now 93, says he’s still has no doubt that Bigfoot is real.“I was in it full-time, seven days a week,” Byrne told CNBC in an interview Wednesday, referring to his earlier Bigfoot hunts. “Right now, I’m still active … [but] it’s a hobby for me now.”