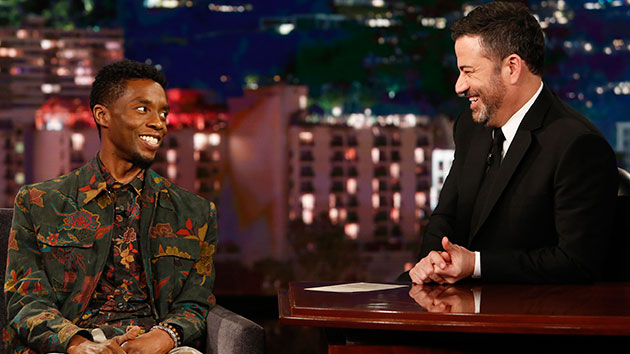 (LOS ANGELES) — Jimmy Kimmel returned to prime time for the 12th straight year, in conjunction with the NBA Finals between the Golden State Warriors and the Toronto Raptors, for Jimmy Kimmel Live: Game Night.

Boseman stars as an embattled NYPD detective who gets a shot at redemption after being called to help in a citywide manhunt for a cop killer. As the search intensifies, authorities go to extreme measures to prevent the killers from escaping Manhattan by closing all 21 bridges to the island. The 41-year-old actor describes it as “a thriller from beginning to end.”

Neither Boseman nor Brooklyn-born Kimmel knew there were 21 bridges in and out of New York City, and apparently, neither did the filmmakers, whom Boseman says originally wanted to call the film “17 Bridges.”

Another thing Boseman learned about NYC: “Street crime in New York City is done, because they can see everything you do…there are cameras everywhere.  If you want to do a crime, please go inside,” he joked.

Boseman also talked about getting up-close and personal-with a Siberian tiger, and scoring on future NBA star Kevin Garnett when they played together in an amateur basketball league.

Coronavirus live updates: Fauci describes what it was like working with Trump
Girl, 15, stabbed to death in grocery store during fight with four younger girls
Nashville attorney’s license suspended after posting advice on getting away with murder
Biden to lift Pentagon’s ban on transgender people serving in military
Independent investigation underway after Tacoma Police officer hits at least 1 pedestrian with patrol car
Turbulent week of weather ahead with 3 different storms tracking across US