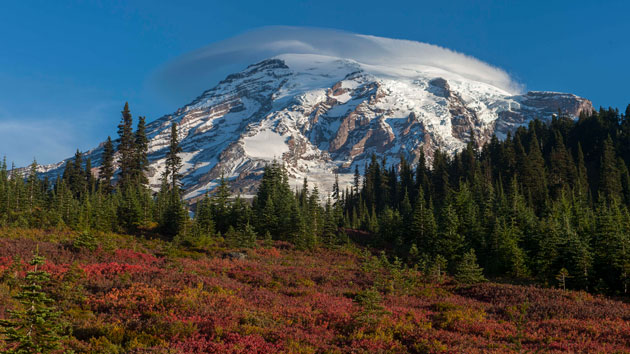 (Mount Rainier, Wa.) — Four climbers were rescued after being stranded on Mount Rainier in Washington state for days.Mount Rainier National Park rangers were informed on Monday that the climbers were stranded on Liberty Ridge, which is known as a uniquely steep and challenging climb, but bad weather prevented helicopter and on-the-ground rescue attempts until Thursday morning.The park helicopter was able to land by the climbers in a space between Liberty Cap and Columbia Crest on the mountain, according to a news release.The climbers were taken off the mountain in two groups, with everyone out by 10:05 a.m.After days of seeing the climbers from helicopters but not being able to land due to high winds and clouds, Mount Rainier National Park spokesman Kevin Bacher said in a statement earlier Thursday that the rangers were “hopeful that a window of visibility may allow us to fly with the park’s helicopter.””We remain hopeful and optimistic for a positive outcome,” Bacher said.Plans were drawn up to rescue the climbers either by air and by land, assuming weather conditions were favorable for rescue workers, according to local ABC affiliate KOMO.The four climbers — Yevgeniy Krasnitskiy, Ruslan Khasbulatov, Vasily Aushev and Kostya “Constantine” Toporov — started climbing Mount Rainier in Washington on May 31, according to a park press notice, but high winds forced them to stop on the Liberty Ridge route.”It’s a place that is on a narrow ridge that goes up the north side of the mountain — very, very steep, very technical in terms of climbing ability, which is why very few people climb the mountain by this route,” Bacher told ABC News in late May, before this rescue operation began. “But [it’s] also why it is so popular among the climbers who have the skills necessary to tackle the challenge. It’s a uniquely beautiful and uniquely challenging and extraordinary route up to the summit of Mount Rainier, but it also brings with it unique challenges.”A park helicopter located the climbers at 13,500 feet on Monday, but 30 mph winds “made rescue impossible using short-haul techniques,” according to the notice.The winds had blown the climbers’ tent and equipment away, so rescuers attempted to drop supplies to them. However, because of the winds, the supplies were dropped 1,500 feet below the climbers.A helicopter located the climbers again on Tuesday, and they’d only been able to descend 250 feet, and a significant distance from the dropped supplies, to a “more sheltered, but still precarious, position,” according to the release.Again, high winds prevented a helicopter rescue or supply delivery, and another attempt later on Tuesday was again thwarted by bad weather conditions.Later on Tuesday, a Chinook with three pararescue jumpers from the Air Force’s 304th Rescue Squadron in Portland, Oregon, and five general support members from an Air Force base near Tacoma, Washington, joined the rescue efforts. They, too, were thwarted by clouds and wind, however.Clouds and rain prevented rescue attempts by helicopter Wednesday, the press notice said, although crews were able to prepare for air and ground rescue operations.The same day the stranded climbers began their attempt — May 31 — one person was killed and two were injured by falling rocks on the Liberty Ridge route.