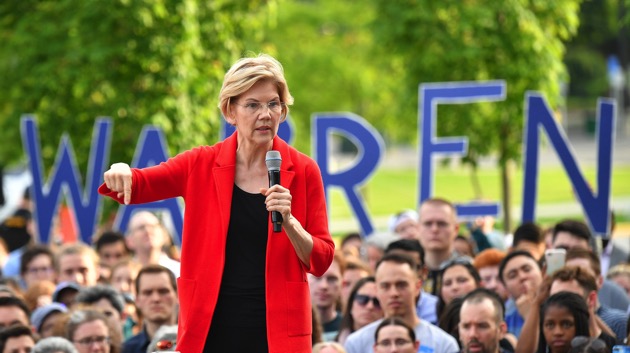 (NEW YORK) — The campaign of 2020 Democratic presidential candidate Elizabeth Warren has unionized, Warren announced on Thursday.”My campaign has submitted their support to join @IBEW 2320,” Warren said on Twitter.Warren’s campaign joins a growing number of campaigns showing support for unions and unionizing themselves. Earlier this year, the campaign staffs of both Democratic candidates Sen. Bernie Sanders, I-Vt., and former Housing and Urban Development Secretary Julián Castro became the first in history to unionize.Unions provide the power of collective bargaining, which allows workers — in this case the campaign staff — to negotiate with the employer — the campaign — in greater numbers. But the effort to unionize is not only about the working conditions of the campaign staff — it’s also a nod to support for unions across the country and the role union workers will play in electing the Democratic nominee.”Every worker who wants to join a union, bargain collectively, & make their voice heard should have a chance to do so. The labor movement has long fought for the dignity of working people, & we’re proud to be part of it,” Warren also said in announcing her campaign’s decision to unionize.This is a developing story. Please check back for updates.Copyright © 2019, ABC Radio. All rights reserved.

Coronavirus live updates: Biden is a ‘game-changer,’ New Jersey governor says
Elliot Gelfand announces candidacy for DuBois area district judge seat
Pandemic-induced recession is over for the rich but not the poor, Oxfam report warns
Sen. Paul does not unequivocally say 2020 election wasn’t stolen
Pastor says addressing resistance to Biden administration is part of the job
‘There is no plan B’ for Tokyo Olympics, IOC chief says