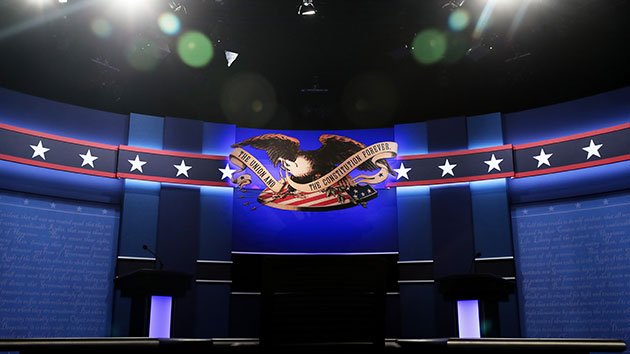 (MIAMI) — There are 20 candidates who have now qualified for the first Democratic debates at the end of this month, reaching the Democratic National Committee’s (DNC) limit for the number of participants appearing on stage.Colorado Sen. Michael Bennet received 1% in a new CNN national poll released Tuesday, the third poll in which he has done so, earning him a spot in the first Democratic debates, hosted by NBC News, MSNBC and Telemundo on June 26 and 27.Bennet, who announced his candidacy early last month, bumped the expansive Democratic field up to 21 candidates with his entrance, upending the race to land one of the 20 spots on the early debate stages — a critical first opportunity for candidates to differentiate themselves from the pack.According to an ABC News analysis, among the 20 qualifying candidates, 13 have cleared both the polling and grassroots criteria set by the DNC, clinching a secured spot on the stage for the first debate, including former Vice President Joe Biden, New Jersey Sen. Cory Booker, South Bend Mayor Pete Buttigieg, Former Housing and Urban Development Secretary Julián Castro, Hawaii Rep. Tulsi Gabbard, California Sen. Kamala Harris, Washington Gov. Jay Inslee, Minnesota Sen. Amy Klobuchar, former Texas Rep. Beto O’Rourke, Vermont Sen. Bernie Sanders, Massachusetts Sen. Elizabeth Warren, tech entrepreneur Andrew Yang and motivational speaker Marianne Williamson.Bennet joins six other contenders who qualified for the debates through only the polling threshold: New York Mayor Bill de Blasio, former Maryland Rep. John Delaney, New York Sen. Kirsten Gillibrand, former Colorado Gov. John Hickenlooper, Ohio Rep. Tim Ryan and California Rep. Eric Swalwell.The 2020 Democrats are less than a week out from the qualification deadline, on June 12, potentially leading to more qualifying candidates entering the fold and then virtually ensuring that at least one candidate will be cut from the debates. Only Montana Gov. Steve Bullock, Massachusetts Congressman Seth Moulton and Miramar Mayor Wayne Messam have currently not crossed either threshold. The second round of debates in July will use the same criteria as the first.Initially, ABC News included Bullock among the candidates who made the debate stage, after securing 1% in three polls, but the DNC publicly announced Thursday that two ABC News/Washington Post polls, one of which qualified Bullock for the first debates, would no longer be eligible polls. The ABC News/Washington Post polls were unique from the other qualifying polls because they used an open-ended format for a question about the Democratic primary, while other polls read off a list of the declared candidates.Bullock’s campaign immediately slammed the rule change, which was first reported by Politico.”While Gov. Bullock was expanding Medicaid to one in ten Montanans despite a two-thirds Republican legislature, the DNC was making arbitrary rules behind closed doors,” Jenn Ridder, Bullock’s campaign manager, said in a statement confirmed by ABC News. “The DNC’s unmasking of this rule singles out the only Democratic candidate who won a Trump state — and penalizes him for doing his job.”“We notified the Bullock team in March, so they have known for months,” Adrienne Watson, a spokeswoman for the DNC told ABC News in a statement after Thursday’s announcement.Bullock now needs to garner 1% support in one more poll to earn a spot on the debate stage.With more than 20 Democratic presidential contenders competing for only 20 allotted spots on the first debate stages, the road to Miami — the site of the first Democratic debates over two nights — has turned into a high-stakes skirmish to secure a podium.To qualify for the debates in June and July, candidates must earn at least 1% support in three separate national or early-state polls conducted from Jan. 1 to two weeks before the given debate, or receive donations from at least 65,000 people across 20 different states, with a minimum of 200 unique donors per state.The new grassroots qualifying rule, implemented by the DNC after the 2016 presidential primary in an effort to prioritize grassroots fundraising, has reshaped the tactics employed by the candidates to push their donor base beyond the 65,000 donor-threshold needed to qualify for the early debate.When Booker inched closer to crossing the donor threshold, he urged supporters to chip in for the opportunity to receive a phone call from him and then blasted his supporter list with photos of his FaceTime session with his 65,000th donor.Gillibrand continues to repeatedly ask for donations as small as one dollar, just to grow her base of donors to the needed 65,000.On her campaign website, Williamson kept a live tracker, driving donors to support her longshot bid as she showcases her progress towards the donor mark.The candidates, who often bump elbows on the campaign trail as they try to stand out among the core constituencies of the party, are resorting to these unconventional strategies to secure the opportunity to land on the early debate stage and break out before millions of voters.The DNC will use both the polling and the donor threshold to winnow down the number of participants, and the committee confirmed to ABC News in May that the final 20 candidates will be divided into two groups based on polling averages and then randomly assigned to a debate stage — to prevent the higher-polling candidates all appearing on the same night.Copyright © 2019, ABC Radio. All rights reserved.