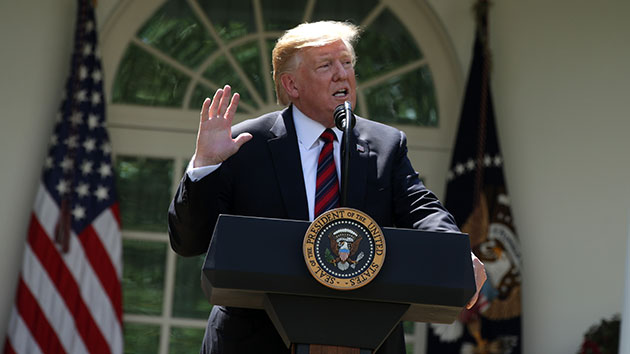 (LONDON) — President Donald Trump stated he would “think about” a ban on gun silencers, following news that the suspected Virginia Beach shooter used a legally-bought gun suppressor.”I’d like to think about it. I mean, nobody’s talking about silencers very much. I did talk about the bump stock and we had it banned and we’re looking at that. I’m going to seriously look at it. I don’t love the idea of it,” the president told Piers Morgan on Good Morning Britain.The gunman suspected of killing a dozen people at the Virginia Beach Municipal Center allegedly committed the massacre with legally-bought pistols and a gun suppressor, according to officials.As Virginia Gov. Ralph Northam urges lawmakers on the state Capitol to take up a package on gun control legislation, the rhetoric around firearms has intensified after more recent mass shootings.When asked about recent gun violence, President Trump said, “What’s happening is crazy. It’s crazy what’s going on with schools and not only in our country.”According to the Gun Violence Archive, there have been 156 mass shootings in the United States in 2019. President Trump, who recently spoke at the National Rifle Association (NRA) convention, defended gun rights.”Gun owners make our communities safer and they make our nation stronger,” the president told NRA supporters in April. The Trump administration banned bump stocks following a mass shooting at a Las Vegas music festival in October 2017 that killed 58 people. That shooter used a bump stock, a device that allows a rifle automatic or semiautomatic firing capability.But in his interview with Morgan, he quickly turned the conversation to knife crimes in London.“Piers, in London you have stabbings all over where everyone is being stabbed,” the president said, adding that he had heard London hospitals were described as “a sea of blood all over the floor.”“It’s a sea of blood. And they don’t have a gun,” the president said. When asked by Morgan what he could do to change his mindset about gun violence, the president stated, “Talk about it.”“It’s a very tough subject,” he said. “But the bad guys are not getting rid of their guns. Pretty much everybody agrees with that.”

At least 21 states activating National Guard troops in capitals to prepare for possible attacks
In scathing draft of letter never made public, Trump chided James Comey for ‘erratic,’ ‘self-indulgent’ conduct
Giuliani says he won’t represent Trump at president’s impeachment trial
Why Joe Biden’s inauguration will be like no other — and how to watch
‘The Marksman’ dethrones ‘Wonder Woman 1984’ at the box office with $3.2 million weekend
Impeachment needed to bar Trump from running for federal office: Rep. Joaquin Castro