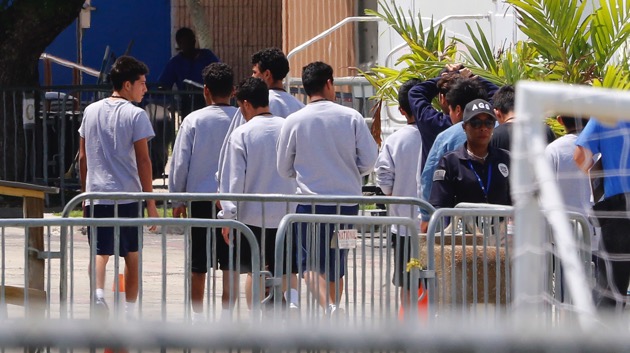 Young men walk in line under the watch of a security officer at the Homestead Temporary Shelter For Unaccompanied Children in Homestead, Fla. (Joe Skipper/Getty Images)
Posted on June 5, 2019 by ABC News

(WASHINGTON) — The Trump administration on Wednesday said it is “scaling back or discontinuing” paying for activities for the estimated 13,000 undocumented migrant kids living in shelters across the U.S., “including education services, legal services and recreation.”The move comes as the Border Patrol announced it apprehended more than 132,000 migrants in May — more than 57,000 of them children and more than 11,000 of those traveling without a parent.The total number for May is the highest single monthly total since 2006 and CBP officials have said they expect to exceed 1 million arrests by the end of the federal budget year.“We are in a full-blown emergency, and I cannot say this stronger, the system is broken,” Acting CBP Commissioner John Sanders said on a call with reporters Wednesday.With regard to the cutbacks on programs for migrant children, Mark Weber, a spokesman for the Health and Human Services Department’s Office of Refugee Resettlement, said HHS was pulling back on its activities “that are not directly necessary for the protection of life and safety.””Additional resources are urgently required to meet the humanitarian needs created by this influx – to both sustain critical child welfare and release operations and increase capacity,” Weber said in a statement provided to ABC News.The Trump administration has asked Congress for $2.9 billion in emergency funds to care for migrant kids.HHS runs shelters around the country for the kids until they can be released to a sponsor, usually a parent or other relative already residing in the U.S.Congress has signaled a willingness to pay for the migrant children but Democrats are concerned about giving the administration other money that can be used for other expenditures on border security.The federal government has struggled to respond to the influx of migrants. The Homeland Security Department told ABC News last week that some 2,400 minors were waiting at border patrol stations to be picked up by HHS and officials blamed a lack of bed space.HHS said last week that it wasn’t out of bed space and that it would take any migrant children in need of shelter transported to its facilities via U.S. Immigration and Customs Enforcement. ICE referred questions to the Department of Homeland Security and HHS.Copyright © 2019, ABC Radio. All rights reserved.