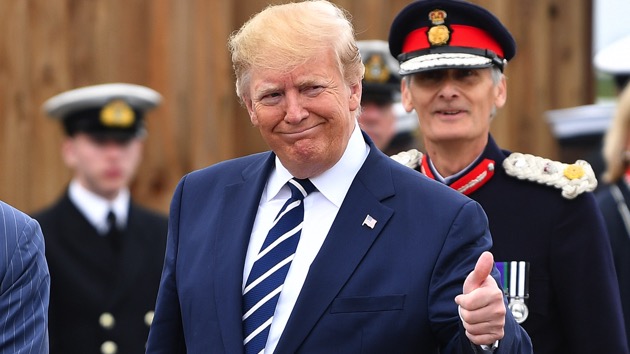 (LONDON) — President Donald Trump sat down with Piers Morgan on Good Morning Britain Wednesday in an attempt to clarify his previous controversial comments on Meghan Markle.”I wasn’t referring to she’s nasty, I said she was nasty about me, and essentially I didn’t know she was nasty about me,” Trump said. “But you know what, she’s doing a good job, I hope she enjoys her life.”In an interview with The Sun on Saturday, a journalist asked the president if he was sorry to miss the Duchess of Sussex, who is on maternity leave, in light of her past criticism of him.He cited a 2016 Comedy Central interview in which Markle, who was an actress at the time, said she would move to Canada if Trump was elected president. In that interview, Markle also called the president “divisive” and “misogynistic.””No, I didn’t know that she was nasty,” the president replied.Hours ahead of his official visit the United Kingdom, Trump pushed back against media reports about the interview.In a tweet, Trump wrote, “I never called Meghan Markle ‘nasty,"” claiming the quote was made up by “fake news media.”

I never called Meghan Markle “nasty.” Made up by the Fake News Media, and they got caught cold! Will @CNN, @nytimes and others apologize? Doubt it!

A debate over the president’s comments ignited over the weekend and an audio recording of the interview was later posted on the Sun’s website.A White House official told ABC News the quote was taken out of context by the media, adding the president wasn’t specifically saying she was nasty. Instead, the official said the president meant he was not aware of previous comments made by Markle. The White House official also pointed out the president said very nice things about the duchess including that he thought she would do an excellent job.Trump is in the final stages of his three-day Britain trip. He has not met Markle during his stay, but has spent time with Queen Elizabeth II and other members of the royal family, including Markle’s husband Prince Harry.Despite Markle’s absence, Trump told Morgan there was no bad blood between him Prince Harry.”I congratulated him and I think he’s a terrific guy,” Trump said. “The royal family is really nice.”Copyright © 2019, ABC Radio. All rights reserved.