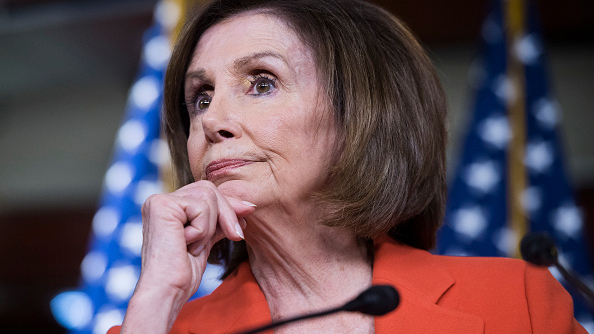 (WASHINGTON) — As House Democrats head toward a pivotal vote next Tuesday to hold multiple Trump administration officials in contempt of Congress, House Speaker Nancy Pelosi on Wednesday denied she feels pressured to move faster toward impeaching President Donald Trump, insisting Democrat leaders “know the path we’re on.”Asked whether she is being influenced by any of the 23 Democratic presidential candidates or Democratic voters who want impeachment, Pelosi pointed back at “six great committees” currently “following the facts.” She then hinted that, depending on how the Trump administration responds in the days ahead to past-due Democratic requests, “there could be more” committees holding Trump officials in contempt beyond the House Judiciary Committee, including the House Intelligence Committee.”We take it one step at a time,” she said. “No, I’m not feeling any pressure.”Pelosi flatly dismissed critics and pundits who have questioned whether she has the stomach to pursue impeachment.”Make no mistake,” Pelosi said, pounding her fist into the podium. “We know exactly what path we’re on. We know exactly what actions we need to take. And while that may take more time than some people want it to take, I respect their impatience. It’s a beautiful thing and it’s important to our country.””We’re following the facts, we’ll take them where they lead us,” she continued. “As we go down that path, we will be as strong as we can be. There is no controversy or ‘try this, try that.’ We are on a path.”Pelosi denied that the House could appear to detour from regular order by including former White House counsel Don McGahn in next week’s contempt package, bypassing a Judiciary Committee vote on contempt.”He’ll be in the contempt [resolution],” Pelosi assured reporters. “It’s not a question of bypassing the committee. We’re working with the committee on all of this, in terms of wording and the rest of it. So it’s not about bypassing a committee. What it is though, is about taking it one step at a time.”House Majority Leader Steny Hoyer announced earlier this week that the House will vote next Tuesday on a “contempt package” including McGahn, as well as Attorney General William Barr, who was voted in contempt of the Judiciary Committee on May 8.She said Democrats can “move more expeditiously” by pursuing civil contempt in court but “it doesn’t mean” Democrats won’t eventually pursue inherent contempt, under which Democrats maintain Congress could fine or otherwise punish Trump officials. “But you have to get started,” she said.Pelosi delivered a brief civics lesson on impeachment – offering her observation that most people wrongly think impeachment means “you’re out of office.””Did you ever get that feeling or are you just in the bubble here?” Pelosi, D-Calif., asked. “They think that you get impeached, you’re gone and that is completely not true.”Pelosi then explained that impeachment is only “an indictment,” a nod to the constitution that the Senate has the sole power to try all impeachments.”So, when you’re impeaching somebody, you want to make sure you have the strongest possible indictment because it’s not the means to the end that people think,” she said, adding it’s not “bye bye birdie.”Pelosi said any decision to ssubpoena special counsel Robert Mueller to testify is “up to the committee.””Hopefully, he would accept an invitation to come,” she said. “They will decide because they’re doing the negotiation.”

Biden administration plans to ‘speed up’ effort to put Harriet Tubman on $20 bill
Vanessa Bryant remembers Kobe and Gianna on one-year anniversary of their deaths
Keira Knightley will no longer do nude scenes for male directors
What to know about the link between mental health and heart disease
Dale Moss says “there’s no one person to blame” for ending engagement with ‘Bachelorette’ star Clare Crawley
Biden’s 1st 100 days live updates: Senators to be sworn in for Trump impeachment trial