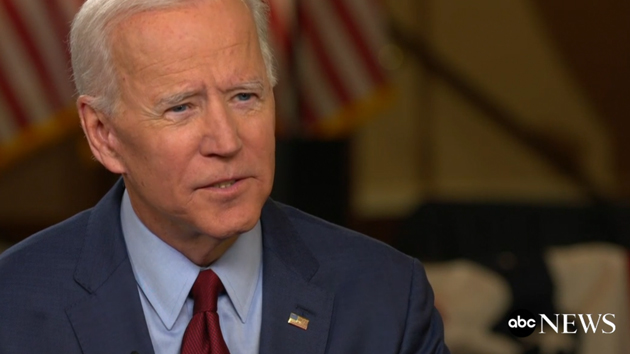 (WASHINGTON) — Former Vice President Joe Biden reiterated his support for the Hyde Amendment, a measure that creates a barrier to abortion for low income women across the United States.”He has not at this point changed his position on the Hyde Amendment,” his campaign said in a statement to ABC News. “The Hyde Amendment does not prevent organizations in the US that provide lifesaving health care services for women from receiving the federal funding they need. But given the current draconian attempts to limit access to abortion, if avenues for women to access their protected rights under Roe V Wade are closed, he would be open to repeal.”The Hyde Amendment was first passed in 1976, three years after the landmark Supreme Court case Roe v. Wade that encoded abortion as a protected right, stipulating that federal funding could not be used to pay for abortions. A few years later, Congress made an exemption for cases in which there was a threat to the patient’s life. An exemption for cases of rape or incest was added in the early 1990s.The law largely affects patients who are on Medicaid, meaning low-income patients have to pay for an abortion out-of-pocket.It was introduced by Rep. Henry Hyde, who said at the time, “I certainly would like to prevent, if I could legally, anybody having an abortion, a rich woman, a middle-class woman, or a poor woman. Unfortunately, the only vehicle available is the … Medicaid bill.”With his campaign’s announcement Wednesday, Biden splits from many in the Democratic Party, including many of his 2020 competitors. Candidates including Sen. Kirsten Gillibrand, D-N.Y., Sen. Elizabeth Warren, D-Mass., Sen. Amy Klobuchar, D-Minn., and Sen. Cory Booker, D-N.J., have called for the repeal of the Hyde Amendment.Biden’s announcement was largely met with criticism from reproductive and sexual health advocates and providers.”To support the Hyde Amendment is to block people — particularly women of color and women with low incomes – from accessing safe, legal abortion,” Kelley Robinson, executive director of the Planned Parenthood Action Fund, said in a statement. “As abortion access is being restricted and pushed out of reach in states around the country, it is unacceptable for a candidate to support policies that further restrict abortion.” Robinson added, “We strongly encourage Joe Biden to speak to the people whose lives are impacted by this discriminatory policy and reevaluate his position.”Destiny Lopez, co-director of the All* Above All Action Fund, whose mission is to undo the Hyde Amendment, invited Biden “to meet with us to discuss his position on abortion coverage bans and lifting the Hyde Amendment.”Lopez added in a statement, “We’re hopeful that just as Vice President Biden has evolved on his support for legal abortion, so too will he advance his understanding of the devastating impact of denying coverage of abortion, especially for women struggling financially. Nearly all our presidential candidates recognize, as do a majority of American voters, that denying Medicaid insurance coverage of abortion can be the same as an outright ban. It has a disproportionate impact on people of color and young people. This is no time to pick and choose on abortion policy.”2020 Democratic presidential candidates have also jumped on Biden’s stance.New York Sen. Kirsten Gillibrand wrote in a tweet that “Repealing the Hyde Amendment is critical so that low-income women, in particular, can have access to the reproductive care they need and deserve.”Washington Gov. Jay Inslee said he voted against the Hyde Amendment in 1993 and added, “It was wrong then and it is wrong now.”Sen. Bernie Sanders of Vermont also reiterated his plan to repeal the Hyde Amendment.