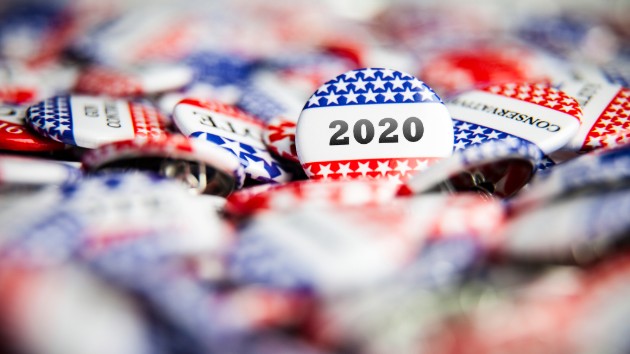 (WASHINGTON) — For the Democrats running in the 2020 presidential contest, who often bump elbows on the campaign trail as they try to stand out among the core constituencies of the party, landing on the first debate stages of the cycle is crucial to breaking out from the pack before millions of voters. The first televised debates, which span two consecutive nights to make room for the large field, are only three weeks away, and with the qualifying deadline rapidly approaching, the pressure on the candidates is mounting to secure a coveted podium.Here is everything you need to know about the first debate:When are the first DNC debates?The first of the party’s 2020 presidential primary debates will take place over two nights, on June 26 and 27 in Miami, Florida at the Adrienne Arsht Center for the Performing Arts. The June debate will be hosted by NBC, MSNBC and Telemundo, and the July debate by CNN.Twenty candidates total will participate (10 on each night), with the lineups for each night chosen at random.

How do candidates qualify for the first debates?The Democratic National Committee announced in February the thresholds required to gain entrance into the party’s first two presidential debates, setting benchmarks for polling and grassroots fundraising that represent the first tangible effort to pare down an already crowded field of candidates. The third Democratic primary debate will be hosted by ABC News in partnership with Univision and is scheduled for Sept. 12 and 13.In order to qualify for the debates in June and July, candidates must earn at least 1 percent support in three separate national or early-state polls conducted from Jan. 1 to two weeks before the given debate, or receive donations from at least 65,000 people across 20 different states, with a minimum of 200 unique donors per state.The number of debate participants has been capped at 20 by the DNC.”We’ve spent months working with media partners to provide this unprecedented opportunity for candidates and voters to get to know each other,” DNC chair Tom Perez said at the time of the announcement in a statement. “Because campaigns are won on the strength of their grassroots, we also updated the threshold, giving all types of candidates the opportunity to reach the debate stage and giving small-dollar donors a bigger voice in the primary than ever before.”The change, which follows past cycles in which both major political parties used polling alone to determine debaters, comes as Perez continues to smooth relations between the committee and liberal party factions that argue Sen. Bernie Sanders, I-Vt., was unfairly disadvantaged during the 2016 primaries. The chairman previously stated that he wanted to ensure that every candidate is given a “fair shake” during the nomination process.

Bennet joined seven other contenders who qualified for the debates through only the polling threshold:

Who is in danger of being left off the early debate stages?There are 21 candidates who have now qualified for the first Democratic debates at the end of this month, but the DNC capped the number of participants at 20, virtually ensuring one presidential candidate will be left off the stage. Among those who have met only one criteria, other declared candidates who have not yet cleared either threshold include Massachusetts Rep. Seth Moulton and Mayor Wayne Messam of Miramar, Florida.

When will the finalized list of participants be released?The qualifying deadline for the debates at the end of June is on June 12, and the committee will confirm the lineup likely in the days after the deadline.Are the DNC rules the same for the later debates?In December, prior to much of the current field’s entry into the race, Perez revealed the party’s plans to hold a total of 12 debates and split the early events into separate sessions to accommodate the expected quantity of candidates. Six of the Democratic Party’s 12 debates will take place in 2019 and six in 2020.The second series of debates in late July have the same qualifying rules. But for the next round of debates happening later this year, the DNC announced new, more stringent qualifying rules that up the ante to qualify for the September debate, hosted by ABC News and Univision, and for the debate to follow, slated to take place in October.In order to qualify for the September and October debates, the DNC requires candidates to meet polling and grassroots funding criteria, and have doubled the thresholds: a candidate must receive 2 percent or more support in at least four national polls and candidates must have received donations from at least 130,000 unique donors over the course of the election cycle, with a minimum of 400 unique donors per state in at least 20 states.The new qualifying rules ramp up the pressure on many in the crowded Democratic field, which has grown to 23 candidates total. Copyright © 2019, ABC Radio. All rights reserved.

‘Ozark’, ‘The Crown’ lead Netflix-dominated 26th Critics’ Choice nominations
Damaging winds expected in California, heavy snow for the Rockies and Eastern Great Lakes
“I’d be up for that!” Liam Neeson wants to re-join the ‘Star Wars’ universe with Disney+’s ‘Obi-Wan Kenobi’ show
‘WandaVision’ star Paul Bettany on his father’s struggle to come out of the closet
Steve Martin shares hilarious thoughts about getting the COVID-19 vaccine
Baby with rare disease survives COVID-19, liver transplant before his first birthday