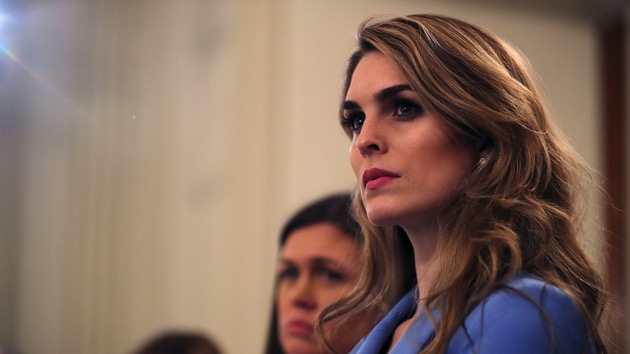 (WASHINGTON) — The White House has directed two former senior West Wing officials not to cooperate with House Judiciary Committee subpoenas for documents in the panel’s investigation into potential obstruction of justice by President Donald Trump, the committee chairman, Rep. Jerry Nadler, D-N.Y., said on Tuesday.It’s the latest standoff between House Democrats and a White House refusing to cooperate with their investigations.The committee issued subpoenas for documents and testimony from White House communications director Hope Hicks and Annie Donaldson Talley, the former chief-of-staff to Don McGahn, Trump’s first White House counsel, last month. The committee also requested documents related to the Trump campaign from Hicks, who served at Trump’s side through his White House run.Even as he noted “President Trump’s continued obstruction of Congress,” Nadler said, “Ms. Hicks has agreed to turn over some documents to the Committee related to her time working for the Trump Campaign, and I thank her for that show of good faith.””Federal law makes clear that the documents we requested—documents that left the White House months ago—are no longer covered by executive privilege, if they ever were,” he said in a statement. “The President has no lawful basis for preventing these witnesses from complying with our request,” he said.In a letter to Nadler, White House counsel Pat Cipillone said the documents subpoenaed were subject of special counsel Robert Mueller’s investigation. He wrote the “documents include White House records that remain legally protected from disclosure under longstanding constitutional principles, because they implicate significant Executive Branch confidentiality interests and executive privilege. Because Ms. Talley and Ms. Hicks do not have the legal right to disclose the White House records to third parties, I would ask that the Committee direct any request for such records to the White House, the appropriate legal custodian.”

The situation mirrors a standoff between the committee and McGahn last month, when Trump directed McGahn not to testify before Congress under subpoena, denying Democrats a witness at the heart of several episodes of obstruction detailed in Mueller’s report.The fight with the Trump White House highlights the challenge facing Democrats as they work to follow up on special counsel Robert Mueller’s report and highlight his conclusions.For months, House Democrats have hoped Robert Mueller and any number of former White House officials would testify publicly on Capitol Hill to bring attention to the special counsel’s findings, serving as a “new John Dean” to capture the attention of the American people as President Richard Nixon’s former lawyer did during the Watergate scandal.Instead, they’re planning a series of hearings on the Mueller report — without Mueller but with John Dean.On Monday the committee said it would hold a hearing titled “Lessons from the Mueller Report: Presidential Obstruction and Other Crimes,” next Monday, featuring Dean and other legal experts and former U.S. attorneys.”These hearings will allow us to examine the findings laid out in Mueller’s report so that we can work to protect the rule of law and protect future elections through consideration of legislative and other remedies,” Chairman Jerry Nadler said in a statement.At the same time, House Democrats are facing another potential standoff with former Trump White House officials over subpoenas for documents and testimony.”We have a number of different witnesses that we are still fighting with the White House about getting, and they are still obstructing justice,” Rep. Pramila Jayapal, D-Wash., a member of the committee, told ABC News. “In the meantime, we have an incredible knowledge base of former prosecutors, people who have lived through impeachment.”Faced with resistance from the administration across their investigations — from following up on the Mueller report to probes of the president’s finances, tax returns and family-separation policy — and denied access to any potential star witnesses against the president, Democrats have increasingly taken a tougher stance against the White House.The House Judiciary Committee held a hearing with an empty chair and quickly advanced a motion to hold McGahn in contempt of Congress. And House Majority Leader Steny Hoyer announced Monday that the House will vote next week to hold McGahn and Attorney General William Barr, who did not comply with a committee subpoena for the full Mueller report and underlying materials, in contempt of Congress, paving the way for Democrats to seek compliance with their subpoenas in civil court.The House Oversight Committee also could vote to hold Barr and Commerce Secretary Wilbur Ross in contempt of Congress next week if the Justice and Commerce Departments ignore a subpoena for records related to an investigation into the addition of a citizenship question to the 2020 census.”That’s why we’re relying on subpoenas, because we sadly concluded that there are no heroic figures in this administration who are willing to put country ahead of service to the president,” Rep. Gerry Connolly, D-Va., a senior member of the House Oversight Committee, told ABC News.Republicans have criticized Democrats’ efforts to follow up on Mueller’s findings and have been quick to charge the majority with wanting to impeach Trump and damage him politically ahead of the 2020 election.In the wake of the Mueller report’s release, and the special counsel’s surprise public statement last week highlighting his key findings, at least 56 House Democrats — roughly 1 in 4 caucus members — have called for the chamber to open an impeachment inquiry, according to an ABC News analysis.House Speaker Nancy Pelosi and her deputies have largely resisted calls for impeachment, sensitive to the potential risks of launching the effort without Republican buy-in. They instead have called for Democrats to focus on the investigations, advance their policy agenda and work to resolve ongoing disputes with the administration in court.The House Judiciary Committee continues to hold out hope that Mueller could be compelled to testify on Capitol Hill, and discussions with his representatives have continued, even though he made clear last week that he doesn’t wish to do so.They are also brainstorming other ways to reanimate Mueller’s conclusions for the broader public and build support for their investigative efforts. Already, they have scheduled public readings of the entire 448-page report on Capitol Hill. Some members have suggested a national campaign with advocacy groups to educate the public about obstruction of justice and impeachment.Copyright © 2019, ABC Radio. All rights reserved.

Biden administration plans to ‘speed up’ effort to put Harriet Tubman on $20 bill
What to know about the link between mental health and heart disease
Jane Fonda to receive Cecil B. DeMille Award at this year’s Golden Globes
Dale Moss says “there’s no one person to blame” for ending engagement with ‘Bachelorette’ star Clare Crawley
Axiom announces first private mission to International Space Station
Biden’s 1st 100 days live updates: Senators to be sworn in for Trump impeachment trial