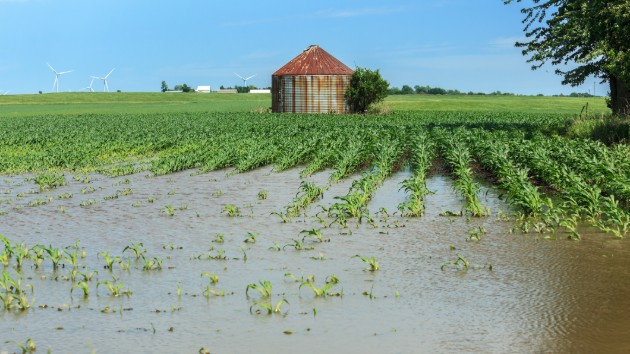 (NEW YORK) — Last week 600 acres of the Hurst family farm was underwater.Those acres already had been planted with corn, and Blake Hurst said the family now had to decide if there was time to replant soybeans and take the chance the herbicide they used for corn had been washed away enough so it won’t kill the new plants. Hurst said he was really struggling with the decision.”It’s just one damn thing after another,” said Hurst, president of the Missouri Farm Bureau. “This one you just sit around and watch it rain ’cause there’s not a darn thing you can do about it.”Historic delays from flooded fields and other weather-related disasters isn’t just a concern for more than two million American farmers. Farmers are a crucial part of the U.S. economy because they bring in so much money from exporting goods. Agriculture makes up 5.4 percent of U.S. gross domestic product (GDP) and 11 percent of employment in the country, according to the Agriculture Department.The bad weather also could hit consumers in surprising ways. If farmers can’t plant enough grains to meet demand, the prices go up. That, in turn, could drive up the cost of meat because corn is often used as feed. Even farmers who have other goods to export face delays from flooded highways and railroads, and overflowing rivers that can’t be used for shipping.The flooding this spring is the latest in a series of mounting concerns for American farmers in the last year, including lower demand for products amid trade disputes. Many farmers had hoped President Donald Trump would reach a trade deal with China and Congress would approve his new agreement with Mexico and Canada, resolving trade disputes that could help win back customers overseas.John Newton, a chief economist for the American Farm Bureau Federation, said farmers are losing money every day they can’t plant this time of year. And because payments are calculated based on acres, farmers are concerned the planting delays will reduce the amount of aid they get from the government due to the trade aid package.”Farmers are on the front lines at a time when farm income’s already pretty low,” Newton said. “I think without these trade assistance packages we’d see a crisis across farm country.”The USDA has several programs for farmers and rural communities affected by severe weather, including to reimburse them for crops lost in floods, but it has not yet said if the planting delays will impact the recently announced aid package.Another concern is that these kinds of weather-related disasters could happen more frequently as a result of a changing climate. Research has predicted storms in the central U.S. could get more severe and bring more rain as warmer temperatures increase moisture in the atmosphere.Hundreds of farmers affected by recent hurricanes, wildfires and floods in previous years are also still waiting for relief money as a proposed $19 billion aid package had been stalled.Fields in states that grow corn like Missouri, Nebraska and Iowa are so flooded that the percent of fields that have been planted is lower than any other year in recorded history, according to U.S. Department of Agriculture numbers. In some states like Illinois and South Dakota, the number of acres planted with corn is more than 60 percent below the average for this time of year.Some farmers have used social media to share their frustrations about the weather, showing images of flooded fields and stuck tractors.Alicia Harvie, director of advocacy and farmer services at Farm Aid, runs a hotline that works with dozens of farmers a month. Harvie said the flooding could create a crisis for American farmers on par with the 1980s, when a large number of family farms closed.She said the flooding and trade issues causing problems now are hitting farms already strained by declining prices and mounting debt.”The average farm family last year made a negative number for their salary,” she said. “What other job do we have where we expect somebody to lose money to do their job every day?”Hurst said there’s also been an emotional toll on farmers who watched their fields fill with rainwater around the same time U.S.-China trade talks broke down.Hurst, who operates his farm with his dad, brothers, nephews and sons-in-law, said his family still has 2,400 acres of soybeans and a greenhouse, but they haven’t decided yet what to do with their flooded land.”The change in mood,” he said, “has been pretty drastic in the last 30 days.”Copyright © 2019, ABC Radio. All rights reserved.