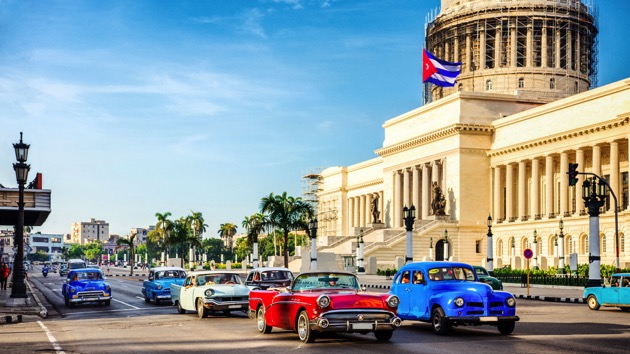 (WASHINGTON) — The Trump administration has announced new steps to further restrict Americans’ travel to Cuba, including banning group tours and cruise ship stops to the island nation.The changes are meant to tighten the economic pressure on the Cuban government, which Commerce Secretary Wilbur Ross called “one of our historically most aggressive adversaries.” The goal is to “restrict non-family travel to Cuba in order to hold the Cuban regime accountable for its repression of the Cuban people and its support of the Maduro regime in Venezuela,” his agency said in a statement.”Veiled tourism has served to line the pockets of the Cuban military, the very same people supporting Nicolas Maduro in Venezuela and repressing the Cuban people on the island,” the State Department added in a statement.Starting Wednesday, group “people-to-people” visits will now be barred. These cultural and educational tours allowed thousands of Americans to visit the island as part of a scheduled visit.For Americans who have already booked a flight or hotel or made another “travel-related transaction,” they will be “grandfathered” in, according to the Treasury Department. Eleven other categories of travel are still permitted, including other cultural exchanges, like by university groups, along with travel to see family members or for humanitarian projects, religious activities, public performances, journalism, or official U.S. government business.This new ban is a step further than the restrictions that were in place before former President Barack Obama moved to repair relations with Cuba and made it easier for U.S. citizens to travel there.”These actions will help to keep U.S. dollars out of the hands of Cuban military, intelligence, and security services,” said Treasury Secretary Steve Mnuchin in a statement, calling Cuba “destabilizing … in the Western Hemisphere, providing a communist foothold in the region and propping up U.S. adversaries in places like Venezuela and Nicaragua.”Effective Tuesday, private and corporate aircraft, cruise ships, private yachts, fishing boats, and other similar aircraft and vessels will also now be barred from traveling to Cuba, according to the Commerce Department. Exemptions will be made for vessels or aircraft that apply for and receive a license, which requires the application be related to medicine, telecommunications for the Cuban people, environmental protection, or aviation safety.It’s unclear if existing cruise reservations will have to be canceled. Neither Commerce Department nor cruise lines, including Norwegian Cruise Line and Royal Caribbean Cruises, have responded yet to a request for comment.”We are closely monitoring these recent developments and any resulting impact to cruise travel to Cuba. We will communicate to our guests and travel partners as additional information becomes available,” Norwegian tweeted to one concerned customer.Trump’s National Security Adviser John Bolton previewed these changes in a speech in April, where he blasted Cuba as part of a “Troika of Tyranny,” along with Venezuela and Cuba: “The United States looks forward to each corner of this sordid triangle falling, in Havana, in Caracas, and in Managua.”He celebrated the changes in a tweet Tuesday, saying it would meant “ending ‘veiled tourism’ to Cuba… We will continue to take actions to restrict the Cuban regime’s access to U.S. dollars.”Cuban Foreign Minister Bruno Rodriguez condemned the decision as “an attack on International Law and the sovereignty of all States. It is the main obstacle to our development and a flagrant violation of the human rights of all Cubans.”Copyright © 2019, ABC Radio. All rights reserved.