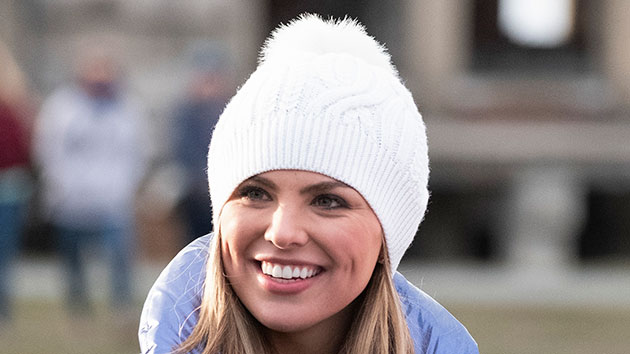 (LOS ANGELES) — On Monday’s episode of The Bachelorette, it was time for the 15 remaining men to leave the mansion and head to Newport, Rhode Island, where Hannah B. was awaiting their arrival. But there was trouble in store, as Luke S. and “psychopath” Luke P. locked horns.

The first date card went to Jed, who met up with Hannah in Boston, Massachusetts for a sightseeing tour that included Quincy Market and the Cheers bar, followed by a visit to the Auerbach Center, home of basketball’s Boston Celtics, and a pickup game with Celtics stars Jaylen Brown and Terry Rozier.

The date goes really well. However, Hannah has one remaining question for the 25-year-old Nashville singer/songwriter, whether there’s room for both music and marriage in his life? He tells Hannah that going into the competition, music was his “passion,” but after meeting her, she is all he needs. Hannah, appreciating Jed’s honesty, admits she’s also “catching the feels,” and gives him the date rose.

The men get down and dirty, competing in an intense rugby game, which sends Kevin to the hospital with a shoulder injury. Meanwhile, Luke P. is taking Hannah’s “blood, sweat and tears” message a little too seriously, body-slamming the other Luke for no apparent reason.

At the cocktail party afterwards, Luke P. is the first guy with whom Hannah speaks. They discuss his overly aggressive behavior during the game, which he tries to defend by accusing Luke S. of coming after him and swinging at him. Hannah’s not satisfied with his explanation, and says that while she cares about him, the incident “worries” her. He responds by insisting that Luke S. is the only other guy in the mansion who has a problem with him, and is more interested in promoting his tequila business than winning Hannah’s heart.

Hannah’s next conversation is with Luke S., who offers his version of the fight. He concedes that he has issues with Luke P., as do all the other guys, and invites her to ask them for herself. She does, and one by one, they all side with Luke S.

Afterwards, the other guys grill Luke P. about the incident and he keeps changing his story, causing them all to walk out, except for Luke S. The two exchange words until finally Luke S. leaves the room, saying he can’t wait until Luke P. gets tossed off the show.

Meanwhile, Garrett takes his turn talking to Hannah. He chooses not to get involved in the drama, using the moment instead to tell Hannah he’s “crushing hard” for her and earns the date rose.

Another one-on-one date, goes to Tyler C., whose first task is to lend support and comfort to a confused Hannah after her difficult group date.

After a day of lobster fishing, he tells Hannah he almost backed out of the competition because his father nearly passed away a couple of months before taping. While his dad was recuperating, Tyler continues, the two of them watched the last season of The Bachelor, and his father became a big fan of Hannah, telling Tyler, “This is your girl.” Tyler promises that the same effort he put into helping his father recover, he’ll devote to his relationship with Hannah. That’s all she needs to hear and she offers him the date rose.

Later that night, they dance to the music of country star Jake Owen, who sings his hit song “Made for You.”

At the pre-rose ceremony cocktail party, it’s Mike’s turn to set Luke P. straight, calling him “unstable” and “a psychopath.” Meanwhile, Luke S. fearing he’s in danger of being sent home, tries to smooth things over with Hannah, but she has yet to make up her mind on which bachelor she wants to believe and the conversation leaves him even more insecure.

Next, in front of the other guys, Luke S. confronts Luke P. about his accusation that Luke P. is only in the competition to promote his tequila business. Luke P. admits he doesn’t really believe that, and says he plans to tell Hannah. Garrett says Luke P. must also do the right thing and tell Hannah he was wrong.

When Luke P. does get his chance to speak to Hannah though he does neither, and doubles down on his previous story. Next, she talks to Luke S., who naturally denies the other Luke’s claims, insisting he’s only looking to get the truth out.

Luke S. returns to the party, where he and the guys — who are all in Luke S.’s corner — continue to argue with Luke P. They’re interrupted by Hannah, who takes both Lukes aside, so that each can tell his story with the other present.

Will both stay, or will one be sent packing? We’ll find out the answer when The Bachelorette returns Monday at 8 p.m. ET on ABC.