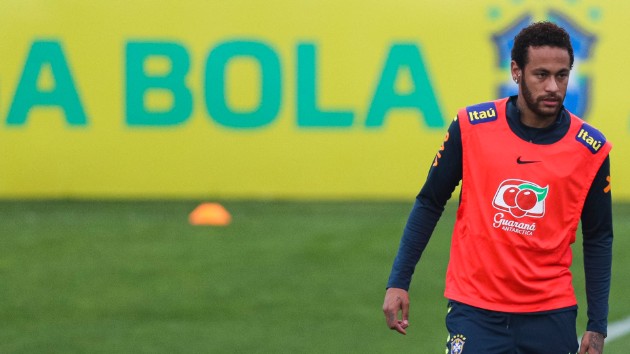 (NEW YORK) — Brazilian soccer star Neymar da Silva Santos Jr. was accused on Friday of raping a woman in Paris last month, Sao Paulo Federal Police told ABC News. The unidentified woman, who is also from Brazil, filed a complaint against Neymar alleging that the soccer player flew her out to Paris and paid for her hotel room, where he visited her “drunk,” police said.The woman, who landed in Paris on May 15, alleges that after some flirting, Neymar became aggressive and forced her to have sex with him, according to police. She traveled back to Brazil on May 17, and says that she was too affected to go to the police immediately, police said. Neymar and the woman met on Instagram, police said.Neymar’s father, who is also his agent, appeared on Brazilian TV Saturday, where he said that he had messages between the two proving Neymar was innocent, ESPN reported. “This is a tough moment. If we can’t show the truth quickly it will be a snowball. If we have to show Neymar’s WhatsApp messages and the conversations with this lady, we will,” he said, according to ESPN.”I know that my son can be accused of many things, but I know the boy that he is, the man that he is, the son of a father and a mother,” he continued. “We will push for justice to be served as quickly as possible.” Neymar is currently in Brazil training with the national team for Copa America. The star was suspended three games from his club team Paris Saint-Germain, last month by the French soccer federation after getting into an altercation with a fan. It was the second time this season he was suspended after a three-game ban by the UEFA Champions League for an earlier incident criticizing a referee. Copyright © 2019, ABC Radio. All rights reserved.

Trump plans to leave in dramatic fashion yet continues to stay out of sight
Coronavirus live updates: California calls for pausing use of Moderna vaccine lot
“I’d be up for that!” Liam Neeson wants to re-join the ‘Star Wars’ universe with Disney+’s ‘Obi-Wan Kenobi’ show
‘WandaVision’ star Paul Bettany on his father’s struggle to come out of the closet
In scathing draft of letter never made public, Trump chided James Comey for ‘erratic,’ ‘self-indulgent’ conduct
Rep. Lou Correa latest member of Congress to test positive for COVID-19 following siege on Capitol