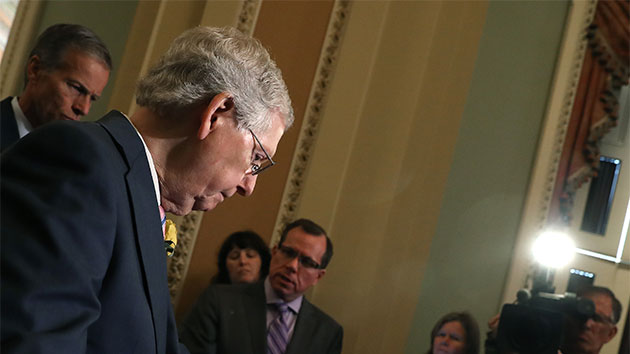 (NEW YORK) — President Donald Trump’s plans to move forward with tariffs against Mexico are running into a major roadblock: his own party.”There is not much support in my conference for tariffs, that’s for sure,” Minority Leader Mitch McConnell, R-Ky., said at a press conference following a lunch on Tuesday, where White House officials tried to make their case for tariffs to skeptical Republicans.But McConnell would not say how far he is willing to go to block the president.”I know the Mexican delegation is here, apparently these talks are going well and I think our hope is that tariffs will be avoided and we’ll not have to answer any hypotheticals such as you suggest,” he said. Many Republicans are already suggesting they could vote on a resolution of disapproval to try and thwart the tariffs, but Trump said it would be “foolish” for GOP lawmakers to attempt to block the tariffs during a press conference with British Prime Minister Theresa May in London Tuesday.”I don’t think they will do that,” Trump said.Congress previously passed a resolution of disapproval after Trump reallocated funding for his border wall, but Trump vetoed it. This time around, however, top Republicans are suggesting they may be able to get a veto-proof majority.”I think the president ought to be concerned about another vote on a resolution of disapproval this time to try to implement tariffs. Tariffs are not real popular in the Republican conference,” Sen. Ron Johnson, R-Wis., said. “If I were the White House I’d be concerned. This would be a different vote on a national emergency for a president who’s enacting tariffs.”Sen. John Thune, R-S.D., called the tariffs “a hard sell.”Thune said a lot is still up in the air and “nobody knows if a vote would be triggered,” but the senator, who is responsible for counting votes in the conference, said, “I think this would be a heavier lift.”Tuesday’s lunch laid bare the tension between Trump’s desire to use tariffs as a threat and the political reality for GOP senators, who are concerned that the tax increase would hurt American consumers and businesses.Kyle Pomerleau, chief economist and vice president of tax analysis at the nonpartisan Tax Foundation told ABC News Live, that — multiplied out across the retail sector — Americans should brace for what would effectively be “one of the largest tax increases in 30 years.””It’s important to think of a tariff as a tax, because that’s what it really is. It’s going to be a tax on a lot of consumer products that Americans buy,” Pomerleau said. “It’s also going to be a big tax on what producers in the U.S. use to produce goods and services. So ultimately families are going to bear the burden.”Top Republicans, like longtime critic of tariffs, Sen. Chuck Grassley, R-Iowa, are also concerned that tariffs could scuttle the president’s United States-Mexico-Canada Agreement trade deal.”It would be my hope that they’re gonna work out things so the tariffs don’t go into effect,” Grassley said.Republican Sen. Joni Ernst was in lockstep with her colleague from Iowa, saying “Mexico and Canada are very good trade partners to the United States, especially when it comes to our agricultural goods, so we do want to move forward with this and we are very concerned about the additional tariffs that have been proposed.”The discussion at Tuesday’s lunch was “somewhat heated, definitely tense. These guys (senators) are hearing a lot from folks back home who are really worried about these tariff hikes. The message was loud and clear — don’t do this,” according to one senior Senate GOP aide.Sen. Ted Cruz, R-Texas, who said there was “deep concern” expressed behind closed-doors, described the negotiations as “a giant game of chicken. Like two trucks headed straight at each other on a country road.” The outcome is only good if Mexico blinks, Cruz said.It’s still unclear if the administration plans to use the existing national emergency declaration, related to the border, to hike the tariffs on Mexico. And if senators could vote to terminate that declaration and thereby end the increased tariffs — or if a whole new emergency declaration would be needed.Republicans are hoping to get more clarity Wednesday after administration officials sit down with a delegation from Mexico at the White House.McConnell relayed Tuesday afternoon that talks between the Mexican delegation and White House officials were “apparently” going well, and that Mexican Foreign Minister Marcelo Ebrard echoed that optimism at a press conference in Washington earlier in the day. Ebrard predicted Wednesday’s meeting will be long, and he intends to highlight that Mexico is already making a big effort to curb migrants, despite what Trump has claimed.