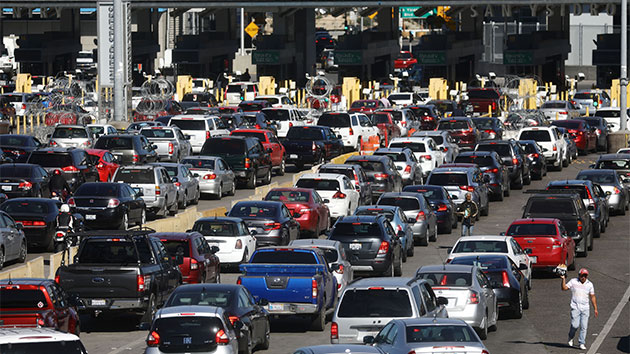 (SAN DIEGO) — A U.S. citizen was shot and killed after he sped through an inspection checkpoint while allegedly attempting to cross into the United States at the San Diego-Tijuana, Mexico border, and then opened fire on officers, according to San Diego police. The driver of a white pickup truck “failed to stop for an inspection” at around 7:30 p.m. Monday at the San Ysidro point of entry, and was shot by U.S. Customs and Border Protection officers, the agency said in a statement Monday. The incident is under investigation, the statement said.”According to initial witness interviews, the suspect was driving through the Port of Entry from Mexico into the United States. He refused to stop for the CBP Officers and attempted to drive through the inspection area. Several CBP Officers attempted to stop the suspect, whose vehicle was eventually blocked by another vehicle. The suspect began firing a gun out of his vehicle towards the officers, then exited his vehicle and continued firing at the officers. The officers returned fire, striking the suspect,” said San Diego police, which are investigating the shooting.First responders attempted to treat the suspect for his injuries, but he did not survive, San Diego police said in a statement Tuesday.The driver was identified by police as a 23-year-old white male. Authorities had identified him but were not releasing his name pending family notification.”All of a sudden, we heard like ‘Bop, bop, bop, bop, bop!’ And, I thought it was just like an M-80 or fireworks or something but everyone started getting out of their cars and we like looked up front and there’s people running around, people hiding behind cars,” Nick Remeyer told ABC10 News in San Diego, California.Seven Customs and Border Protection officers were involved in the shooting, San Diego police said. None were injured.U.S. Customs and Border Protection said vehicle and pedestrian northbound operations were suspended for nearly 30 minutes and then resumed.Copyright © 2019, ABC Radio. All rights reserved.