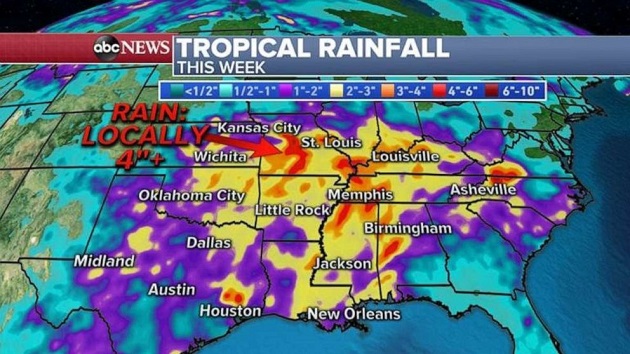 (NEW YORK) — The Arkansas River near Little Rock is cresting at its highest level since 1945 as the region braces for more rainfall. Dozens of levees in Kansas, Missouri and Arkansas have failed, with more rain forecast for Tuesday and Wednesday.In St. Louis, the Mississippi River on Thursday is expected to crest at 46 feet, the highest since the city’s historic 1993 flood.Tropical moisture from the Gulf of Mexico is forecast to combine with a western storm system and add to the region’s precipitation levels. Some spots may see more than 4 inches.Two tornadoes were reported on Monday near the Kansas-Colorado border along with golf ball-sized hail. Parts of Kansas also saw wind gusts of 88 mph.That same storm system is heading east through Wednesday, producing severe storms from the Midwest all the way to the East Coast.The threat Wednesday moves more into the Ohio Valley and mid-Atlantic region, including Washington.Damaging winds and hail are likely the biggest threats from this major system.