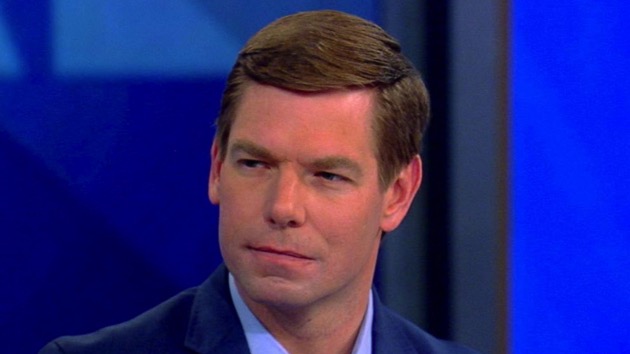 (NEW YORK) — For Rep. Eric Swalwell, guns are a central theme of his presidential campaign.The son of a police officer and a criminal prosecutor himself, Swalwell, D-Calif., said he doesn’t want to get rid of guns altogether, but he does want to get rid of semiautomatic assault weapons.”Ban and buy back every single assault weapon in America. I’m the only candidate calling for that,” Swalwell said on ABC’s The View. The California congressman has extensively called for a gun buyback program in an effort to ban the possession of military-style semiautomatic assault weapons.Swalwell said on ABC’s Good Morning America, in April, “you know, I’m telling folks, keep your rifles or shotguns keep your pistols. We just want the most dangerous weapons on the hands the most dangerous people and most gun owners believe that.”Just this past weekend in Chicago, 10 people were killed and 52 injured in gun violence, according to the police. It’s a city Swalwell visited on May 22 to discuss gun violence with local community activists including Tamar Manasseh.”This weekend 50 shootings, 50 people were shot. 10 people were killed. That’s different than the church shootings and the school shootings. Those are blocks that we’ve just failed to invest in. People who don’t have hope.” Swalwell said on The View. Swalwell said Manasseh told him hopelessness has impacted these communities greatly, “the only time they expect to wear a suit is when they’re in the box.” He called for investing in high-quality schools, jobs and health care.Sitdowns such as these have been a staple throughout his campaign. The congressman has made it a point to sit down with community leaders and activists from across the country.