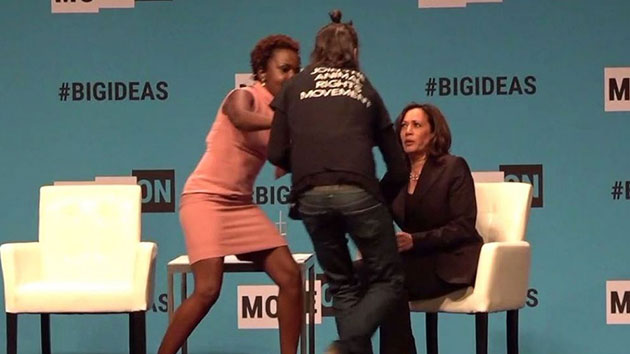 (SAN FRANCISCO) — Kamala Harris probably wishes she could’ve proven it in a different way, but the senator and Democratic presidential candidate showed she can stay cool under pressure Saturday night.Harris was speaking at the MoveOn #BigIdeas forum in San Francisco when an activist rushed the stage and grabbed the microphone away from her.Security was nowhere to be found, though moderator Karine Jean-Pierre, MoveOn’s chief public affairs officer, immediately jumped out of her seat and tried to cut off the man.Harris handed over the mic and largely didn’t react to the commotion. The microphone was cut off and you could not hear the protester’s words.As security finally jumped on stage and carried the man away, Harris calmly stood up and walked offstage.She could be seen mouthing, “What is going on?” and then, “I don’t know what’s happening,” as she left the stage.Harris returned to the stage about a minute later, to chants of “Ka-ma-la” from the audience.An animal activist group claimed responsibility for the man rushing the stage. He was identified by the group as Aidan Cook. The group’s spokesperson, Matt Johnson, told ABC News that Cook was neither detained nor arrested; he was simply kicked out.ABC News has reached out to the San Francisco Police Department for any information they might have.”Cook called on Harris to support ordinary citizens rescuing animals rather than the factory farms that abuse animals, sicken local populations and repress whistleblowing activity,” a press release from the group said.Harris was in her home state for three campaign events on Saturday as she tries to secure the Democratic nomination for president in 2020.She spoke earlier in the day at a Service Employees International Union event, where she addressed financial issues and repealing the Trump administration’s tax cuts.”I am proposing, one, that we deal with the tax code in a way that we reform the tax code so that working families who are making less than $100,000 a year will get a $6,000 tax credit that they can receive it up to $500 a month,” she told the union crowd. “On day one, we’re gonna get rid of that tax bill, that benefit of the top 1% and the biggest corporations in our country. That’s how we’re going to pay for it.”She later spoke at the California Democratic Convention, also in San Francisco, where she was one of 11 candidates given seven minutes each to make their cases for president.Copyright © 2019, ABC Radio. All rights reserved.

‘WandaVision’ star Paul Bettany on his father’s struggle to come out of the closet
Trump-Biden transition live updates: Harris announces resignation from Senate
Newborn giraffe dies when mother accidentally steps on its neck after giving birth
Biden team preparing for ‘any scenario that should arise’ on Inauguration Day
Kamala Harris set to resign from US Senate so she can preside over it
Rep. Lou Correa latest member of Congress to test positive for COVID-19 following siege on Capitol