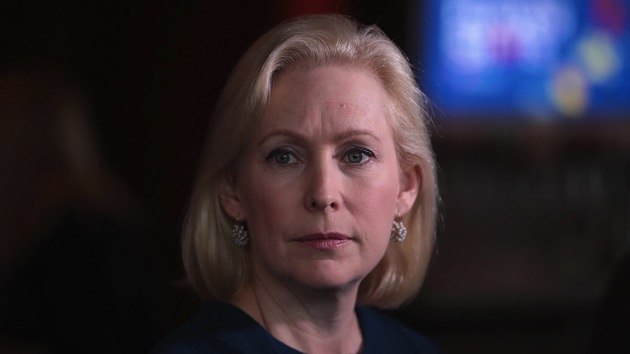 (DUBUQUE, Iowa) — Sen. Kirsten Gillibrand, the latest Democrat to appear on a Fox News town hall, used the opportunity to attack the network for its coverage of the late-term abortion issue.On Sunday night in Iowa, Gillibrand was asked by a member of the audience — named Susan — what her position is on late-term abortion.Gillibrand began her response by reiterating her stand that “when it comes to women’s reproductive freedom, it should be a woman’s decision.”Gillibrand then pivoted and began her attack on the network hosting the town hall because the network uses “a false narrative” on the issue. She criticized the network’s use of the term “infanticide” saying, “it doesn’t exist.”The New York senator was then cut off by moderator, Fox News anchor Chris Wallace, who told her, “Senator, I just want to say we’ve brought you here for an hour.”Wallace added, “We have treated you very fairly. I understand that, maybe, to make your credentials with the Democrats who are not appearing on Fox News, you want to attack us. I’m not sure it’s frankly very polite when we’ve invited you to be here.”Gillibrand said that she would “do it in a polite way.”However, she was interrupted by Wallace again who said, “Instead of talking about Fox News, why don’t you answer Susan’s question?” referring to the question asked by the member of the audience.Gillibrand continued her attack on the network for their use of infanticide, calling it “illegal” and “not a fact.””I believe all of us have a responsibility to talk about the facts,” she said.Gillibrand was involved in another animated exchange with Wallace over a tweet she wrote in December that “Future is Female.” Gillibrand was asked what she meant by her tweet. She explained that she wants “more women’s voices heard” and she wants to see more women at sitting at the table.Wallace interrupted the senator asking “what about men?”Gillibrand exclaimed, “They’re already there! Do you not know?” Gillibrand received a loud round of applause after that.Gillibrand added that her tweet was “not meant to be exclusionary; it’s meant to be inclusionary.”Gillibrand’s appearance on Fox follows Sen. Bernie Sanders, South Bend Mayor Pete Buttigieg, and Sen. Amy Klobuchar.Copyright © 2019, ABC Radio. All rights reserved.