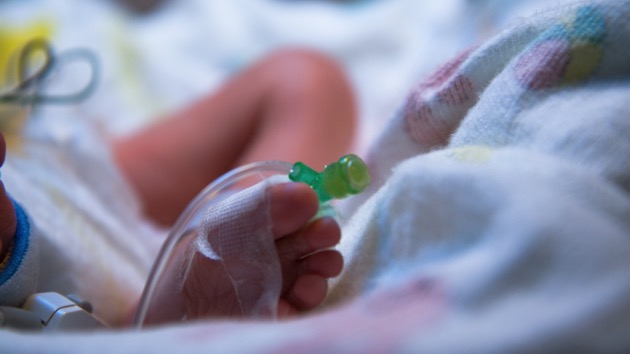 (NEW YORK) — What it believed to be the world’s smallest newborn baby to survive entered the world nearly four months earlier than planned, weighing 8.6 ounces – about the size of a juice box.Baby Saybie was born at the Sharp Mary Birch Hospital in San Diego. She was transferred to the Neonatal Intensive Care Unit (NICU), where care is given to newborns who need special attention, and finally sent home after 5 months of treatment.Premature babies like Saybie, who were unlikely to survive if they were born just a few decades ago, are thriving thanks to advances in modern medicine.Dr. Jonathan Blau, a neonatologist at Staten Island University Hospital, told ABC News that the NICU usually handles the monitoring and treatment of newborns who are at risk for survival. A NICU team usually consists of a neonatologist, a specialized nurse, and a respiratory specialist who arrive and prepare a baby warmer even before the baby is delivered. When the baby is born it is taken to a warmer where heat and oxygen are provided.Very small premature babies like Saybie are usually hooked up to a tube connected to a breathing machine, and a team constantly monitors their heart rate and blood pressure. “They also get medicines, hydration through IVs, x-rays, and antibiotics,” said Dr. Blau.All babies undergo dramatic body system changes after birth. Some of these include breathing on their own, changes in the heart structure and direction of blood flow in large vessels. Healthy babies born after 9 months of gestation typically do not need medical help to go through these changes. But premature babies or those with health problems can have difficulty making that transition into the world.Survival rates for premature babies vary based on the length of pregnancy, weight and sex of the baby, and whether they received a specific medication to help quicken their lung maturity before birth.A developing fetus goes through important growth throughout pregnancy, including in the final months and weeks, according to the CDC. For example, the brain, lungs, and liver develop during the final weeks of pregnancy. Babies born too early, especially before 32 weeks, have higher rates of death and disability. In 2015, preterm birth and low birth weight accounted for about 17 percent of infant deaths.According to Dr. Blau, preemies born at 24 weeks now have a 50 percent chance of survival. That chance goes up with increasing gestational age. Once the fetus reaches 28 weeks, over 90 percent of preterm babies survive.It has been standard to provide lifesaving treatment to a baby born at 24 weeks, according to Dr. Blau, but now doctors are using new technology to try to save babies born ever earlier in some cases.Major improvements and specialization in the past 50 yearsCare for premature babies has developed immensely over the last few decades, and it’s hard to believe less than a century ago, preemies were sent home with their parents, often with no medical intervention.The first American NICUs providing specialized newborn care were designed in 1960s by Dr. Louis Gluck, around the same time doctors were learning more about the spread of infection.Dr. Gluck’s research showed that bathing babies and washing hands reduced the number of bacterial infections. His discovery transformed the NICU layout from babies isolated in cubicles to one large room filled with newborns in their incubators.In the 1970s, doctors discovered the benefits of mothers holding their babies after giving birth. Dr. Heidelise Als, a specialist in newborn infant behavior, created the Newborn Individualized Developmental Care and Assessment Program (NIDCAP), and encouraged family involvement and individualized care plans for each baby.Families began staying overnight in the hospital, and were encouraged to participate in “skin to skin” bonding, sometimes also called “kangaroo care,” where the baby is held closely or placed on the mother’s chest to maximize skin contact. Increased skin contact in the NICU has many benefits for the baby including reducing stress levels, helping with growth, controlling the heart rate and regulating breathing.Technology to better treat premature babies continues to be developed today. Earlier this year, a team of scientists at Northwestern created and are testing soft, flexible wireless sensors for babies to monitor their vital functions, replacing long cords, and found that they were just as accurate and allowed better parent-child interaction.“We have more sophisticated ventilators that have allowed some of the smallest babies to survive,” Dr. Blau said.With a growing base of professional knowledge about neonatal care and constant improvements in technology, Dr. Blau thinks the future is bright.“In addition to lifesaving care for our youngest newborns, we will strive to maximize developmental outcomes so these children can live happy and healthy childhoods.” Copyright © 2019, ABC Radio. All rights reserved.