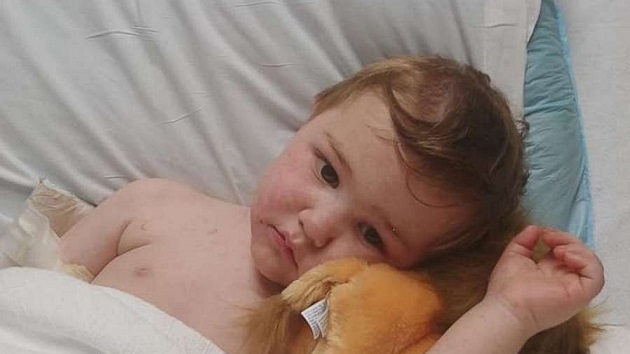 (LOUISVILLE, Ky.) — A Kentucky mom says her son was left unconscious after catching a rare and potentially deadly disease from a tick bite.Kayla Oblisk said her 2-year-old son, Jackson, came down with a case of Rocky Mountain spotted fever, a rare infectious disease, after being bitten by a tick.”They just pulled it off and moved right on,” Oblisk told ABC affiliate WHAS-TV on Friday. “We didn’t think anything else of it at that point.”The family didn’t think much of it at first, but they started to worry when Jackson began running a fever. Oblisk took him to the doctor when she started to notice light pink spots all over his body.”My kid wouldn’t get up, he wouldn’t eat he wouldn’t drink, he was running a 105 degree fever,” Oblisk said. “We couldn’t get him to do anything, if you touched him he screamed.”She said someone mentioned that Jackson might have Rocky Mountain spotted fever, but Oblisk said it was too rare to believe. The chance of getting bit by a tick with the bacterial disease is one in 20,000, according to WHAS, but that’s exactly what Jackson had.The rare disease left young Jackson unconscious for nearly a week. He woke up for the first time on Friday — his second birthday.”I’m so glad that as a parent I said to myself, ‘Ya know something isn’t right,’ and followed it,” Oblisk said. “Just celebrating the fact that we are almost positive that he is going to be okay.”Oblisk said Jackson is on the mend, but now she’s struggling to pay his medical bills. Her family created a GoFundMe campaign to help with the expenses.“Guys, Jackson has already passed his out of pocket maximum of $12,500 in the past 4 days,” the campaign said. “Help his parents out any way you can whether you can or can’t donate please share.”Copyright © 2019, ABC Radio. All rights reserved.

Nearly a dozen ex-military members among those arrested in connection with Capitol riot
DC police officers speak out after US Capitol siege: ‘I thought … I might die’
Taco Bell introduces new plant-based menu items, plus a special message about the return of potatoes
Blizzard warning issued for Midwest as storm moves into Northeast
NY passenger bus hangs off overpass in the Bronx after crash, at least 8 left injured
Nation’s capital being turned into ‘fortress Washington’ ahead of inauguration