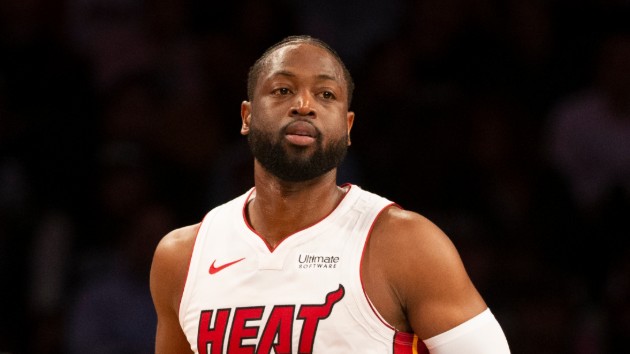 (PARKLAND, Fla.) — Retired Miami Heat star Dwyane Wade surprised graduates at Marjory Stoneman Douglas High School in Parkland, Florida, on Sunday, sending the crowd into an uproar. Wade became one of the school’s biggest supporters in the wake of the 2018 shooting that left 17 people dead. He also paid a visit to the school when it first reopened after the deadly shooting.He began his speech on Sunday by reminiscing about that visit.”My life is bigger than basketball and that’s why I asked to come to Marjory Stoneman Douglas to do whatever was needed of me,” Wade said. “I remember pulling up and seeing a few security guards outside. I remember being met by one of the staffers. I remember us walking to the school and I remember hearing absolutely nothing. I remember thinking to myself, ‘I’ve never felt — I’ve never heard this kind of silence before in my life."”One of the shooting victims, Joaquin Oliver, 17, was a major fan of Wade and was buried in the former NBA superstar’s jersey.Wade said the school’s story inspired him to be a stronger leader, noting how many of the survivors became advocates for gun control.”Thank you for reminding me of my purpose. I’ll try to continue to be a leader and the fighter that Joaquin Oliver thought I was,” he added, causing the crowd to cheer. “What I loved most and appreciated the most was that you all became advocates. You became the faces and the voices for kids all around the world. I’m so proud to say the words MSD strong.”