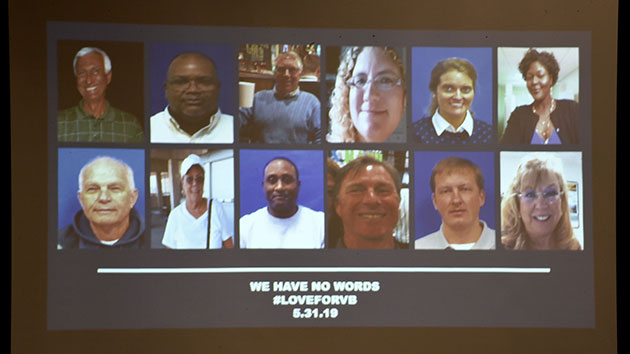 (VIRGINIA BEACH, Va.) — The 12 people who were gunned down in a municipal building in Virginia Beach, allegedly by a disgruntled employee, were named Saturday in an emotional news conference by fellow city employees.One by one, city manager Dave Hanson read the names of the people who were killed in the mass shooting Friday afternoon in Building 2 of the Municipal Center.”They leave a void that we will never be able to fill,” Hansen said in the Saturday morning news conference.As he read the names, photos of the fallen victims were shown on a projector, accompanied by their titles, departments and years of service to the city. Eleven of the victims worked for the city, Hansen said.The victims are:Laquita C. Brown, worked in the Department of Public Works for 4 years.Tara Welch Gallagher, Public Works engineer for 6 years.Mary Louis Gayle, an engineer for 24 years at Public Works.Alexander Mikhail Gusev, a right-of-way agent for 9 years in Public Works.Katherine A. Nixon, a 10-year employee at Public Utilities.Richard H. Nettleton, worked for 28 years as an engineer in Public Utilities; he also served in the military with Hansen.Christopher Kelly Rapp, had worked just under a year as an engineer with Public Works.Ryan Keith Cox, account clerk for 12 years with Public Utilities.Joshua A. Hardy, engineer for 4 years with Public Utilities.Michelle “Missy” Langer, administrative assistant with Public Utilities for 12 years.Robert “Bobby” Williams, special projects coordinator with Public Utilities for more than four decades.Herbert “Bert” Snelling, who was not an employee with the city, was a contractor trying to fill out a permit.Hansen said their families have been notified.”We are going to wrap our arms around those who have served with us in Virginia Beach and make sure their families … are supported,” he said.Four other victims remain hospitalized, officials said.Copyright © 2019, ABC Radio. All rights reserved.