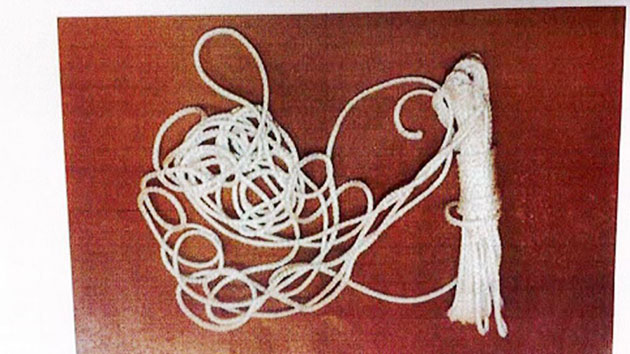 The documents include never-before-seen evidence photos, as well as text messages and emails that shed light on how the office worked with Smollett’s attorney to handle the dismissal of Smollett’s criminal case.

“These documents include, among other things, the work product of her senior felony trial staff, settlement communications and documents which are exempt from Freedom of Information requests,” the statement continued.

Friday’s release is the result of an FOIA request and a motion made by news organizations, including ABC News, to unseal the records.

The first of those communications is a handwritten document dated March 14, 2019, the same day that Jussie Smollett pleaded not guilty to 16 felony counts of disorderly conduct and filing a false police report in a Cook County courtroom.

Police say Smollett fabricated a street attack on himself on Jan. 29, 2019, after which he told authorities that he was attacked by two men who shouted homophobic slurs at him, wrapped a noose around his neck and poured an unknown substance on him, authorities said. He also claimed that a week earlier, on Jan. 22, he had received a threatening letter in the mail on the set of “Empire.”

On the handwritten document, Assistant State’s Attorney Risa Lanier wrote about an offer to Smollett for 15 hours of community service, $10,000 bond for restitution and, following completion of community service, a “nolle pros” of the case with expungement. Nolle pros is a formal notice of abandonment by a plaintiff or prosecutor of all or part of a suit or action.

The same document also indicates that on March 22, 2019, Lanier spoke with Smollett’s attorney, Patricia Brown Holmes, regarding the disposition of the matter. The following morning, after many conversations, Holmes told Lanier over text message that Smollett would complete 15 or more hours of community service with Rainbow PUSH Coalition that weekend and agree to release his bond to the city of Chicago.

Assistant State’s Attorney Joseph Magats, the prosecutor handling the case after Foxx’s recusal, confirmed with Lanier over text that “the defendant and PUSH know…that they shouldn’t be publicizing this.” The case was scheduled to be advanced to a judge on March 26, 2019.

After Smollett traveled to Chicago to complete the community service and just a day before an emergency hearing was held to dismiss all charges against Smollett, Lanier and Holmes haggled over language announcing the deal to ensure that it did not indicate his community service was the result of a deal between attorneys in exchange for dismissal of charges because of a concern it would indicate guilt.

Holmes first sent Lanier proposed language that included: “The public is also reminded that a charge is merely an accusation and that a defendant is presumed innocent until and unless proven guilty, and that the State has the burden of proving guilt beyond a reasonable doubt.”

Lanier wrote in an email to Magats and Tandra Simonton, Foxx’s spokeswoman, that she did not agree with this specific language. Magats agreed, writing: “This could be construed as the defendant being able to buy his way out of the case because he is a good guy.”

She later told Holmes it was “unlikely” she would use the language. Lanier and Holmes ultimately agreed on a statement for the court that Lanier believed didn’t “indicate [Jussie had] done anything at [sic] the request of the state.”

Following the dismissal of charges, Holmes expressed displeasure that Chicago Police Supt. Eddie Johnson and then-Mayor Rahm Emanuel appeared on television “saying that Jussie is guilty and that he participated in a hoax.”

“If you want to say you’re innocent of a situation then you take your day in court,” Johnson said in March. “I would never — if someone falsely accused me — I would never hide behind a brokered deal. Period.”

Holmes was also unhappy that Magats reportedly issued a statement indicating Smollett’s bond was forfeited because of deferred prosecution and vowed “to respond,” saying “it is totally not fair and a violation of his rights.”

The Chicago Police Department wasn’t notified until shortly before the emergency hearing dismissing all charges against Smollett. According to an email from Lanier to Holmes, the Cook County State’s Attorney’s Office’s goal was “to keep the information as contained as possible.”

The reasoning to withhold the information from the Chicago Police Department, according to a text written by Foxx, was in part to ensure bad information was not given out. “Demonstrates why short notice is better,” she wrote to a colleague after she says Johnson called her for an explanation of the dismissal of charges.

The documents released by her office also shed light on Foxx’s displeasure that she was advised to “recuse herself” from the case based on non-factual rumors that she was related to Smollett.

In a text message, Foxx wrote: “I thought it was dumb but acquiesced. It’s actually just racist.”

According to a statement released by her office, “attorneys within the office advised against using the term “recusal” in this context, given that there was no actual conflict of interest. Those communications were not escalated to the State’s Attorney herself.”

Foxx added in a statement: “This has been a unique case from the very beginning, where the victim became the suspect during the investigation. Allegations of a vicious homophobic and racially motivated attack shook our city and the nation with understandable anger and fear. I did not have a conflict of interest in this case; only a sincere desire to serve the community.”

“I spoke with Mr. Smollett’s family and others while he was still considered to be the victim of a hate crime in an effort to streamline the case and alleviate any concerns about the integrity of the investigation. False rumors circulated that I was related or somehow connected to the Smollett family, so I removed myself from all aspects of the investigation and prosecution and delegated my authority and responsibility to my First Assistant so as to avoid even the perception of a conflict. I regret that my attempts to this end created confusion outside the office.”

The released files also include never-before-seen evidence photographs of the white clothesline rope allegedly placed around Smollett’s neck in the attack and the Yucatero hot sauce bottle allegedly used by the brothers to pour bleach on Smollett. In addition, surveillance images of the Osundairo brothers in taxis and fleeing the area where the alleged attack happened were also shared for the first time.

New information on the criminal investigation and a more detailed timeline were also revealed in the documents, including numerous search warrants for multiple social media accounts and content, internet usage, cell phones, computers, a safe deposit box and physical persons.

Returns from one search warrant, for example, reveal that Smollett had approximately 20 phone calls between himself and Olabinjo Onsundairo from Jan. 14-30, 2019. On Jan. 29, the day of the alleged attack, at 12:29 a.m., Olabinjo Osundairo called Smollett about 19 minutes after Smollett’s plane landed in Chicago and just minutes before Olabinjo Osundairo ordered the Uber to set off for the crime scene. The two exchanged phone calls again later on that day and then again the day after.

Another search warrant document reveals that Chicago Police found several stamps that appeared to match the style of the stamp used on the hate letter sent to Smollett on the set of “Empire.” Police also found an “Empire” TV show script that says “Bola” Osundairo was a stand-in actor on the show on that same date.

According to the documents, Ambibola “Abel” Osundairo also told Chicago Police he got cold feet shortly before the attack when he observed a vehicle in the area and was nervous someone might believe the attack was real “and call the police or shoot him.” The documents also state he said he considered not carrying out the attack “but decided to carry it out as he was already there.”