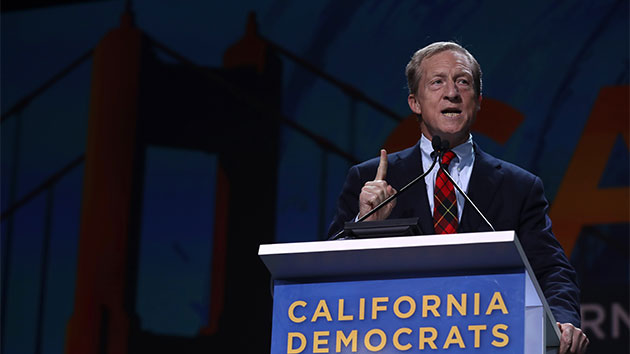 (WASHINGTON) — Demonstrators rallied at the Washington Monument on Saturday to call for the impeachment of President Donald Trump. Members of the Need to Impeach movement partnered with the civic action group NextGen America to persuade Congress to start the impeachment process.

“We’ve actually trained people on how to meet with their member of Congress, how to speak to media and connect their story to issues of impeachment. There are 50 members of Congress now that support impeachment,” said Jeremiah Chapman National Director of Cultural Organizing, for NextGen America.

A number of Democratic presidential candidates have also inched closer to supporting impeachment after special counsel Robert Mueller’s public statement last week in which he said he does not intend to testify in a Congressional hearing.

NextGen America, which is funded by billionaire Tom Steyer has helped Democrats get elected. However, despite Steyer’s efforts to help Democrats, he has clashed with party leaders. Last year, Speaker of the House Nancy Pelosi allegedly called an advertisement sponsored by Steyer to get Trump impeached a “distraction,” according to Politico.

Under the U.S. Constitution, a president cannot be charged with a federal crime while in office. The Trump administration continues to refer to Attorney General Barr’s final conclusion that there was “no collusion, and no obstruction.”

Pelosi appeared on “Jimmy Kimmel Live” on Thursday night to further defend her stance. “There is a school of thought that says if the Senate acquits you, why bring charges against him in the private sector when he’s no longer president? So when we go through with our case, it’s got to be ironclad. Ironclad,” she said.

Pelosi recognized the external support that has helped Congress pass laws. “The Republicans, they had like 60-some attempts to abolish the Affordable Care Act or pieces of it. And the reason we were successful was not because of us inside outmaneuvering. It was the outside mobilization.”

Independent organizations like NextGen America believe public pressure has been paramount in garnering support for impeachment.

“Grassroots organizing has been really the backbone of this entire movement. We’ve had over eight million people sign our petition to impeach,” Chapman said. NextGen America continues to partner with smaller organizations who might not have the same resources.