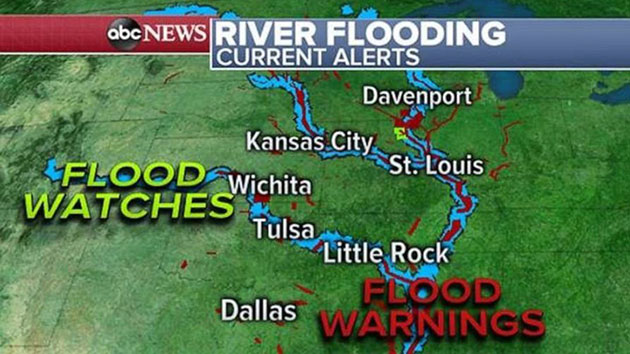 (NEW YORK) — River flooding remains a concern through the weekend in parts of the central U.S. after weeks of relentless severe weather.May was the wettest it has been in four years in Arkansas, with some locations in the state receiving more than 15 inches of rain. Tulsa, Oklahoma, also saw its third-wettest May on record.The Arkansas River is still in major flood stage in parts of Kansas, Oklahoma and Arkansas. However, a brief period of relatively dry weather is currently helping rivers recede to a degree.The Missouri River, near Kansas City, is expected to crest at its highest level since 1993 late Saturday morning.Another system is expected to drop out of the Rockies next week and begin the next round of heavy rain for parts of the Southern Plains.Currently, it looks like there is an increasing potential for heavy rain that could lead to additional flash flooding in parts of Oklahoma and Texas by midweek. It likely will move into Arkansas later next week and could exacerbate any ongoing river flooding.Despite almost 125 severe weather reports, Friday was a relatively quiet severe weather day compared to the last few weeks across parts of the central U.S.A system will move in to the parts of the central U.S. on Saturday and bring severe thunderstorms along a cold front from Texas to Michigan. Several cities in the region are at risk for severe storms, including Wichita, Kansas; Kansas City, Missouri; St. Louis; Peoria, Illinois; Chicago; and Indianapolis.There is an enhanced risk for severe storms across eastern Missouri and central Illinois. The main threats from this system are damaging winds and large hail. While brief tornadoes are possible, it is not the main threat this time.On Sunday, this system will slide over the East Coast and bring the next round of severe weather to parts of the Northeast. Storms will reach the major Interstate 95 cities sometime during between 4 p.m. and 7 p.m.There is a slight risk for severe weather from Washington, D.C., to New York City. The main threats will be damaging winds, large hail or a brief tornado.Copyright © 2019, ABC Radio. All rights reserved.